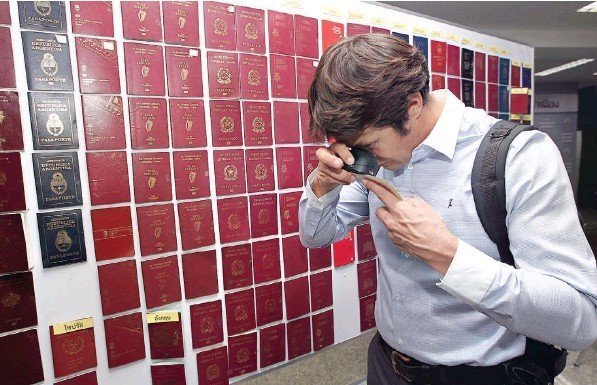 Passport forger The Doctor captured in Thailand after many years ABOVE: A French Interpol officer inspects a fake French passport next to other fakes of various nations ahead of a press conference at the Immigration Police Bureau in Bangkok yesterday.

Hamid Reza Jafary, 48, who reportedly lived in Thailand for more than 25 years, has confessed that he was the forger known as “The Doctor”, who supplied fake passports to South Asian (Pakistan, India, Bangladesh) human smuggling gangs besides selling to his worldwide clientele, charging Bt50,000-Bt80,000 per book.

Most of those who came to him were from the Middle East, who wished to enter Europe and Australia.

The clients could order fake passports on the Internet and wire money to the gang after which the forged passports would be sent to them by express postal services, police investigation found.

“The Doctor” had kept himself away from the public eye and contacted customers only via 4-5 agents hence no one knew his face and real name.

The only thing known about him was that he was a bald Iranian in his 40s and that is the reason the police investigation took so many years, Natthorn said. Jafary, reportedly admitted to have learned forgery skills from his family.

He claimed to have imported tools from China and used handcarved plates combined with advanced technology to produce “mirror- grade” passports, which were said to be hard to detect for the naked eye.

Jafary was arrested on Monday at a house in Tambon Klong Luang Phaeng along with his forgery tools such as 18 passport pattern screen blocks and 173 fake passports, mostly European, which were ready for delivery. He initially presented a fake Brazilian passport of another name to police as his identification. The police subsequently arrested his five Pakistani male accomplices – identified as Cheema Ahsan Javed, Amer Buit, Rahim Khan Pathan, Gohar Zaman, and Muhammad Tariq – who allegedly helped him contact customers.

Jafary was presented to the press along with 173 fake passports. The event was also witnessed by officials from UK, French, New Zealand and Australian embassies.

Natthorn said police had been working on passport or visa stamp forgery cases since 2013, leading to arrests of middlemen and traffickers. Many of those cases were linked to “The Doctor”. Natthorn hailed the crackdown on the foreigner-operated “fake passport factory” in Thailand as the biggest one in years.

He said this would contribute to Thai authorities’ efforts to suppress passport forgery and international human trafficking crimes.

As the accused was wanted by national security authorities in various countries, police would contact their counterparts and seek to arrest more accomplices, he said.

He also urged the Thai public to watch out for foreigners without apparent job and alert the Immigration Police Hotline 1178 around the clock if they noticed anything suspicious.