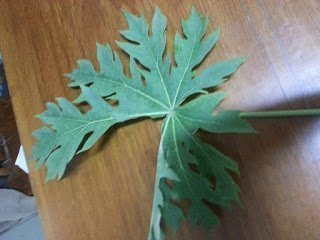 Tisane experiments; papaya leaf, and ginger with herbs and fruit

Kind of odd for a tea blog to keep going on about tisanes but some recent experiments were interesting.  The idea isn’t to point towards a certain “herb tea” someone might want to replicate as much as describe that experimentation, which others may find of interest, or could take further in their own directions.

On the subject of tea (real tea) I did just visit a new local friend, and another friend visiting Bangkok I’d met before, and tried a nice Oriental Beauty that he picked up in Taiwan recently on a visit, and some darker roasted Tie Kuan Yin from there.  But somehow it didn’t seem to fit as context for a blog post, as well to only include as mention that I really am still drinking teas, and I’ll get back to those sorts of write-ups.

Somehow it seems unlikely most readers would take this in the direction I did, cutting off a leaf in the yard and testing out drying it.  I’ve ran across health claims related to papaya leaf tisane in the past, that it would cure cancer, which of course hardly seems worth considering, unless one has cancer, and then who knows, drinking it couldn’t hurt.  If it does actually help with cancer that’s an anomaly, given how such claims seems to go, random ideas that get repeated.

I wasn’t trying to improve my health, more just curious what it would taste like, and how “processing” would go.  I’d expect it to be a bit bitter, although there is always the possibility of adjusting that with oxidation or roasting steps (or trying to; more messing around).  The version I made was as simple as could be; I picked a papaya leaf in the yard, a medium sized one, cut it to small pieces, and dried in on low heat in an oven for just over a half hour.

I was surprised that the “tea” was actually good (seems too strange to say “tisane” or “infusion,” and awkward to avoid nouns).  The first impression was that it tasted a lot like pumpkin, at first like raw pumpkin, with a slightly roasted flavor that also resembled the pumpkin seeds taste.  I had expected it to be bitter but there was only a trace of that, a little like the taste of a dandelion leaf.

The second time I tried it I re-roasted the tea to test the effect, stirring it in a slightly hot steel wok for a few minutes, careful not to singe the leaves too much.  I couldn’t bring myself to actually brown the leaves out of fear of ruining it, although the color changed a little, and it would be possible to go that far with such a step.

The taste change after brewing it was amazing; it tasted almost exactly like roasted tomatoes.  Anyone that cans tomatoes would be familiar with that, or it’s a great way to start on making a fresh tomato sauce.  After a few light infusions the taste shifted a bit back towards the earlier, non-roasted version, more like pumpkin.

For another experiment I might try oxidizing the tea (not that I actually know how), trying out crushing the leaves a bit and allowing more air contact before a heating step, and maybe adjusting roasting.  There is a good bit of papaya growing in the yard so I can keep borrowing leaves for the experiments, and this is the one way to know if something is really organic, to live with the plant.  In researching the health benefits (the next point) I ran across this how-to guide for drying papaya leaves for “tea,” and it said just to hang them in a dark place, for weeks, and to let them dry like that.  Sounds a bit odd, really, although maybe related to the curing process for tobacco, which I’m also not familiar with.

I might mention a little about health benefits, while I’m at it.  A dedicated website lists out lots: cancer prevention, good for skin health and digestion, anti-parasitic, and it’s a diuretic that support detox (somehow would sound better if they’d skipped that last part).  The Livestrong organization supported the anti-cancer claim, and mentioned an actual study related to it (although it’s common for people skeptical of such claims to pick out flaws in study parameters or linkages).

Ginger with herbs and fruit

Due to having a cold I tried making a home-made ginger tea.  I can’t say online claims suggest that’s a good idea, that it works as a remedy, but somehow it made sense to me.  I should look up what is supposed to help since I’m getting colds too often lately.  I just read an article on the health effects of herbs (“The Healing Properties of Spices,” really) and per that cardamom is supposed to help with colds, based on running down the standard claims related to masala chai spices.  I did add cardamom, just probably not enough to make a difference.

This seems a good place to mention that I don’t put a lot of faith in the standard health claims for teas or herbs or spices but I don’t disbelieve them either.  I’ve done some research for some tisanes in past posts and good references on health claims is hard to turn up, but trustworthy nutritional content references that suggest there is measurable nutritional value that would possibly help in some isn’t so hard to find.

Related to just consuming ginger, when I was younger we would “juice” it, mix it with other vegetables ran through a juicer.  It’s quite spicy but it doesn’t take much milder vegetable base to offset some flavor, and probably best with a bit of apple to cut it further.  Dosage might refer back to what online research says is good for a cold, or how much ginger to use if that supposedly is, but we never added much.
Lately I’ve been making masala chai and experimenting with a Christmas blend (without any ginger), so messing around with tisanes is sort of a continuation of that instead.  I initially prepared this version to be like a tea-free masala chai:
-ginger:  1 1/2″ of one substantial root, very thinly sliced
-cinnamon:  a good bit of one stick, freshly hand ground
-clove:  spice powder (I didn’t have cloves handy in whole form)
-cardamom:  spice powder (I do have cardamom pods on hand but that takes more messing around)
-mulberry leaf:  sort of a base used to replace tea
-rosemary:  dried spice version needles, just a bit to round out flavor
-salt:  just a dash
It occurred to me when tasting this that making a real tea-free masala chai would be tricky, and would require more working through that base flavor and structure.  It’s hard to imagine how to really replace tea but I think cocoa could work to cover some part of that range (but then it wouldn’t be caffeine free, although I would expect that the caffeine in cocoa is pretty limited).
After trying it the tea still needed something, so I added half an apple, ground with a hand grater.  I don’t know if the resulting blend actually helped my cold but it was nice, interesting.  I didn’t boil this version, though, just brewed it a lot of times to make quite a number of cups of “tea.”

Making a masala chai last time I noticed an unusual thickness to that tea.  It wasn’t a thick, full feel as some high-mountain oolongs have–or other tea types, in varying degrees and expressed differently–but a really substantial viscosity change.  This tea had that too.  Any ideas which ingredient was doing it?  I could imagine someone finding thick tisane / herb tea disgusting but it was just interesting to me.  But then I live in Asia, where one really can’t be too squeamish about odd textures, or even about random smells encountered walking the streets.  I’m not into squishy textures enough to love most types of dim sum but I really do enjoy the Chinese desert of mixed beans, jellies, palm seeds, and lotus root over ice.

Both tisanes and versions of black teas are also native here but in the popular form Thais drink tisanes as single ingredient types, mixed with lots of sugar, prepared in jars and sold over ice in a separate part of food courts.  That blend I just described wouldn’t ring a bell, and I’ve never heard of anyone here making a tea out of papaya leaf.