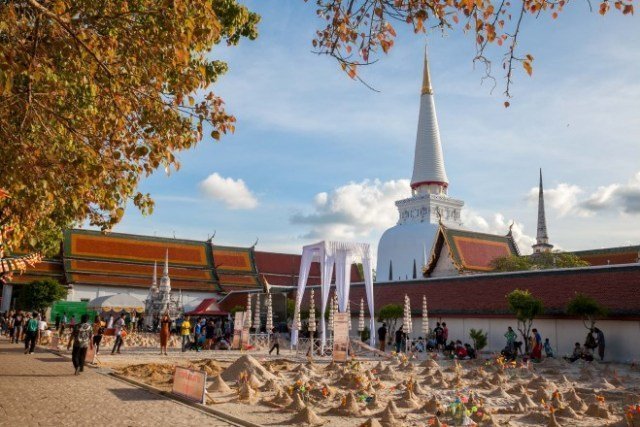 Nakhon Si Thammarat Seeking Out The Awesome In Thailand

Credits : The Tourist Authority of Thailand

Nakhon Si Thammarat – some 780 kilometres south of Bangkok, is one of Thailand’s lesser-known destinations among international visitors yet boasts national parks, a fascinating history, vibrant culture and ever-welcoming people.

As this Southern Thai province is currently promoting a new Nakhon Si Awesome marketing campaign, here’s a rundown of the best local attractions.

This Buddhist temple, dating from the 13th century, is the most important in Southern Thailand attracting pilgrims from across Asia. Those who have never visited will recognise the distinctive bell-shaped 78-metre chedi, which features on Thailand’s 25 Satang coin. The famous chedi, is surrounded by 149 smaller pagodas making the temple a pleasant place to walk around. There are also great examples of Buddhist art and the small museum has surprises including a whale’s skeleton.

For centuries, Nakhon Si Thammarat was an influential trading port visited by merchants from China, India and Sri Lanka and in the 17th century, traders from Europe established trading posts here. The result is a blend of history, culture and religion, which is easily explored on foot by strolling down the city’s main Ratchadamnoen Road.

Start by the remains of the 12th century walls, a large section of which lie in the city’s main park. The walls give an idea of what a thriving city it must have once been. Further along the road, you’ll find Wat Wang Tawan Tok where the traditionally-constructed monks’ residences won an award for conservation. Don’t miss Ban Tan Khun, a wooden building made in the southern Phan-Yah style. Over a century old, it only takes a few minutes to explore, but with its antiques and pictures gives a charming glimpse into the past.

For a deeper appreciation of Nakhon Si Thammarat’s history, stop by the city museum where you’ll find local artefacts and impressive displays. Or if you are seeking a new take on Songkran, then this historic city is worth visiting to celebrate the Thai New Year a unique way.

To enjoy the province’s tranquil side, visit Khiriwong Village in the Lan Saka district. Here, locals specialise in growing fruit; such as, mangosteen, durian and rambutan, and by-products; such as, jam and wine. Visitors can spend the night in homestays and take ecotours.

Making batik clothing is a popular activity for day-trippers to Khiriwong, but most people visit the local rivers to enjoy the greenery, picnic and bathe. The holidays are a great time to visit if you want to enjoy local colour and have sanuk (fun) as families flock here to float on inner tubes in the cool water and to enjoy tasty local dishes in bankside restaurants

It’s easy to think that shadow puppet shows or Nang Talung, as they’re known here, have long gone along with horse-drawn transport and oil lamps. Well everyone likes a good story and this makes Ban Nang Talung one of the most compelling of Nakhon Si Thammarat’s attractions.

Suchart Subsin (named a national artist in 2006) established the museum to keep shadow puppetry alive and though he has since passed, his work carries on at the museum. You can see the leather puppets being made and tour the displays of some of the most famous characters from Thailand’s shadow puppet shows. But don’t miss seeing an actual performance. The characters come alive, cleverly animated by performers behind the screen and there are modern touches; such as, airplanes and motorbikes to move the tale along.

Nakhon Si Thammarat is a vital rice producing province and its rich soils are protected by the Pak Phanang Basin Development Project, a Royal Initiative of the late King Bhumibol Adulyadej. The Uthokvibhajaprasid Barrage stops saline water from flooding into the district and rendering the soil infertile. It’s an impressive site to see as it spans the Pak Phanang River. Nearby is the famous 100-year-old market where you can enjoy snacks and watch people selling local fish from alongside the quay.

If you’ve a few days to spare and are in good shape, trek in Khao Luang National Park, which has the highest mountain in the South. The plant life is outstanding, and there are over 300 species of orchids to discover as well as a type of fern known to exist for 180 million years.