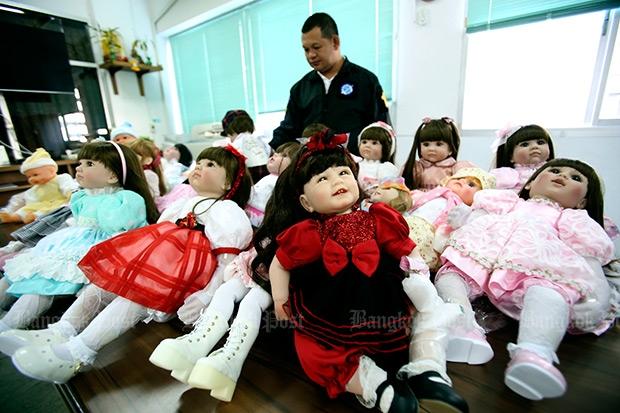 Attempts to bolster the nation’s dwindling population with dolls, magically imbued with the spirits of child angels, is being undermined by perverted tourists. These “luk thep” dolls are now to be found in bar and massage parlors throughout the country.

The effect on bars can be seen everywhere, bar girls have been dressing up as dolls and pretending to be luk thep. The go-go dancers have gone and been replaced on stage by heavily painted girls in children’s costumes. They do not move at all and just stand in stiff postures.

Private Tye went to the Dolls House bar, which is a favorite for western tourists trying to pick up luk thep. We talked to Sam and Sid from Bristol. Sam said he had an inflatable back home, but she was very passive. “I like something with a bit of spirit” he grinned. Private Tye asked them about fake luk thep. “Yes that’s the problem here, you pick up a go-go dancer and then find out its really a man. You pick up a luk thep and then find out its a real girl” said Sid, “or a real man” added Sam.

While the luk thep that belong to rich families are happy and pampered, it is a very different story for dolls that belong to poor farmers. Look in the fishbowl of any massage parlor these days and, in addition to lots of Esarn girls picking their noses, you’ll see a couple of luk thep looking “pretty as a picture”. Most of them have been taken from their homes by doll traffickers. These traffickers buy dolls from impoverished families, get them addicted to drugs, and then sell them on to the sex industry.

Private Tye talked to Mowmark, a typical farmer from the north. He told us that he is facing hard times. The Shans that do all the work on his farm are demanding higher wages. He can not meet the hire-purchase payments on his new karaoke machine, and the price of laow khao (rice whiskey) has gone up. “I used to get extra cash when I was paid to vote and go to political rallies, but no more” Mowmark told us, while chewing on the roasted leg of his neighbor’s dog. Mowmark explained, “I just did not have enough money to get drunk every night, so I had to sell my luk thep to the trafficker.” He added “I sold all my real children years’ ago.”

However, the authorities are fighting back. Yesterday, Peter Prevert, a 52 year old ex-pat from Doncaster, was arrested for operating a Dollophile ring. Neighbors in Mai Chang had noticed that that he was enticing local luk thep to his house with offers of sweets. Following a raid, police found obscene photographs of dolls on the hard drive of his computer. Apparently, Prevert had been selling these pictures to Dollophiles world-wide.

There hopes that things will get better. A famous Korean actress, inspired by the film “Air doll”, has opened a shelter for battered luk thep. One poor creature had been so badly treated that she cried “mamma, mamma,” all day long. The Korean told Private Tye that some perverts like boy dolls. She related the horrifying story of one boy luk thep that was discovered in a brothel. Police found him propped up in the corner of a room near the body of the brothel owner who had had his throat cut. This boy doll has been so traumatized that all he can say is “Hello, my name is Chucky”. 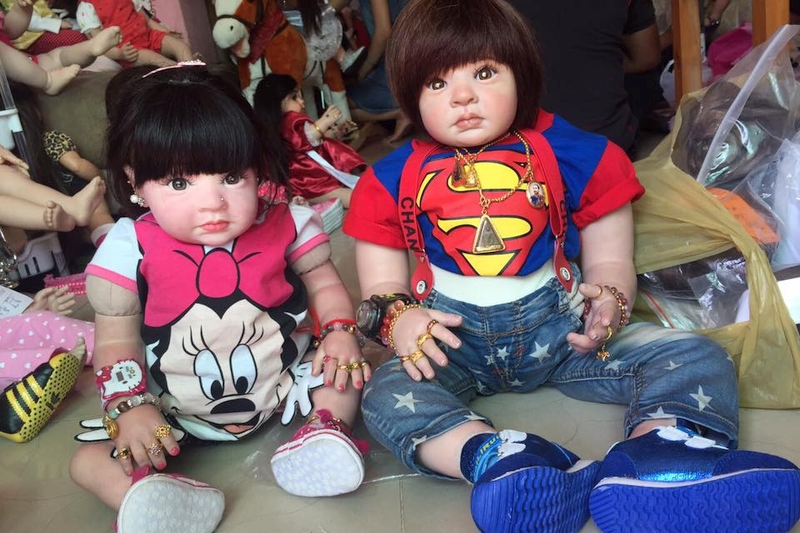 Many of these dolls are being forced into prostitution