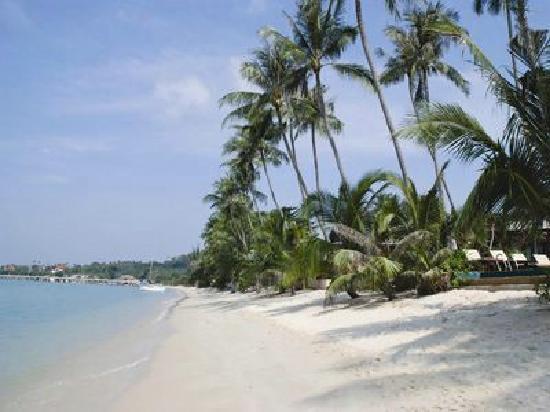 The beautiful Koh Samui Island in the Gulf of Thailand

Koh Samui Island (or Koh Samui, Thai: เกาะสมุย, Thai pronunciation: [kɔ̀ sàmūj]) is an island off the east coast of the Kra Isthmus, Thailand. Geographically in the Chumphon Archipelago, it is administratively part of Surat Thani Province. Koh Samui Island is Thailand’s second-largest island after Phuket, with an area of 228.7 km2, a population of over 63,000 and a hotel occupancy rate of 73% as the number of visitors increases. Abundant tourist resources, sandy beaches, coral reefs, and coconut trees are present on the island.

The island was probably first inhabited about 15 centuries ago, settled by fishermen from the Malay Peninsula and southern China. It appears on Chinese maps dating back to 1687, under the name Pulo Cornam. The name samui is mysterious in itself. Perhaps it is an extension of the name of one of the native trees, mui. Some people believe that the word “samui” derives from the Malay word “saboey”, or “safe haven”, although there appears to be no credible corroboration of this. Ko is the Thai word for “island”.

Until the late-20th century, Koh Samui Island was an isolated self-sufficient community, having little connection with the mainland of Thailand. The island was without roads until the early 1970s, and the 15 km journey from one side of the island to the other could involve a whole-day trek through the mountainous central jungles.

Koh Samui Island economy now is based primarily on a successful tourist industry, as well as exports of coconut and rubber.

Economic growth has brought not only prosperity, but also major changes to the island’s environment and culture, a source of conflict between local residents and newcomers from other parts of Thailand and elsewhere.

Ko Samui Island is in the Gulf of Thailand, about 35 km northeast of Surat Thani town (9°N, 100°E). It is the most significant island in the Chumphon Archipelago. The island measures some 25 km at its widest point. It is surrounded by about sixty other islands, which together compose the Ang Thong Marine National Park (Mu Ko Ang Thong National Park) and include many other popular tourist destinations, including, Ko Pha Ngan, Ko Tao, and Ko Nang Yuan.

The central part of the island is an almost uninhabitable tropical jungle mountain called Khao Pom, peaking at 635 m. The various lowland and coastal areas are connected by a single 51 km road, running mostly along the coastline and encircling the bulk of the island. On the northwest coast of the island is the old capital, Nathon. Although Nathon spreads over a large area, the actual port and main business district is relatively small.

Nathon is the major port for vehicular and goods transportation from the mainland, it is the centre of the fishing industry, and remains the seat of the regional government. The majority of governmental functions are based here, as is the public hospital. Being the location of the main port and the closest inhabited area to the mainland provided the impetus for Nathon becoming the commercial centre for Koh Samui Island locals. More recently, the decline in dependence on the local coconut industry, the continued growth and development of the tourist industry, and the northeastern location of the airport, has seen the slow move of the commercial centre to Chaweng.