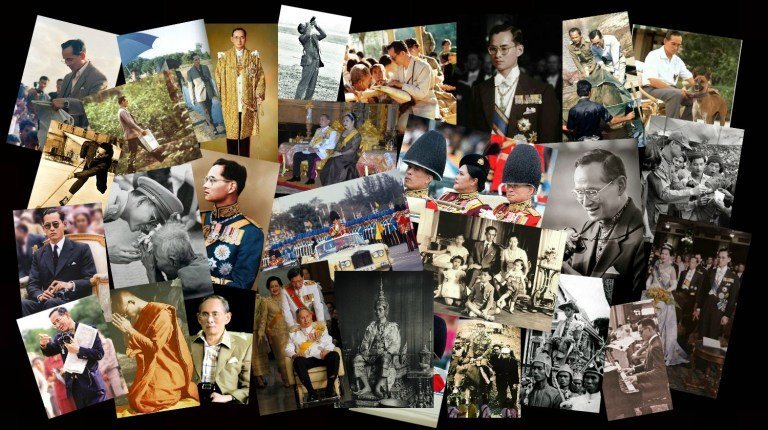 king Bhumibol Adulyadej Thailand. In honor of the late King Bhumibol and after a little over a year of mourning, the people of the Kingdom have their final chance to bid farewell to their King, before his soul is dispatched to rejoin the former kings of Thailand, through a Royal Gateway to another Realm

king Bhumibol Adulyadej Thailand.The Pyre under construction with the Grand Palace in the Back ground

Just a stones through from the Grand Palace in Bangkok, at the public square of Sanam Luang, slowly rises, what will be the impressive and somber, nine-spire funeral pyre, built for possibly the nation’s most beloved king.

This once finished, painstakingly built pyre is a reflection of the Buddhist and Hindu belief in the sacred golden mountain, called Mount Meru. Situated in the centre of our universe it supports the heavens and passes through the centre of the Earth, in Thailand is also seen as a traditional Royal Gateway to another Realm.

This universe was made of thirty-one planes of existence stacked in layers, and three realms, or dhatus. The three realms were Ārūpyadhātu, the formless realm; Rūpadhātu, the realm of form; and Kāmadhātu, the realm of desire. Each of these was further divided into multiple worlds that were the homes of many different type of beings. This cosmos was thought to be one of a succession of universes coming into and going out of existence through infinite time.

Our world was thought to be a wedge-shaped island continent in a vast sea south of Mount Meru, called Jambudvipa, in the realm of Kāmadhātu.

The main cremation tower once finished will be 165 feet tall, with a seven-tiered roof and spire, surrounded by eight smaller pavilions representing mountains that surround Mount Meru. (Or Sumeru, or Shumisen) The nine towers also reflect King Bhumibol’s position as the ninth monarch of the Chakri dynasty. Water gardens at the pyre’s four corners represent the Cosmic Ocean that flows around it.

The pyre (Phra Meru-mas – Meru for short), tells the story of the king’s many accomplishments for his people, depicting dams, wind farms, reservoirs and irrigation projects, he instigated. There will also be a small garden with a plot of rice and vegetation commemorating the king’s unwaving commitment to rural development and medical care.

In addition to traditional gold, the structures will be decorated in colors associated with King Bhumibol: yellow, pink and green. See our post Colour, astrology and lucky days.

king Bhumibol Adulyadej Thailand. The royal chariot bearing the urn of Princess Bejaratana Rajasuda Sirisobhabannavadi is pulled through Bangkok in 2012. The late Kings Service will be on a far grander scale. Picture by Reuters

Unlike the wooden Royal Pyres of centuries gone, this mainly iron framed edifice, will not be burnt to the ground. While the actual Cremation will be held within its walls, later the pyre/Meru will be dismantled, and as is traditional, the component parts will be donated to temples, charities and other destinations around the country.

While the funeral pyres of today are no longer simply wooden structures, in times past the entire male population of Thailand, would be required to shave their heads, as a sigh of respect, as the result of the demise of a king, see our post Tonsure Ceremony.

Six grand processions are planned for the ceremonies, both on land and water, along with numerous performances and exhibitions in honour of the late king.

October 25th: Final night vigil and a royal merit-making ceremony will be held at 17.30, in preparation for moving the royal urn to the Royal Crematorium at Sanam Luang ceremonial ground. It will take place at Dusit Maha Prasat Throne Hall in the Grand Palace.

king Bhumibol Adulyadej Thailand. The Fine Arts Department is creating the Himmapan-creatures for the decoration of the royal crematorium. Photo/Fine Art Department.

October 27th: The removal of the royal ashes and relics (Śarīras)

On the fifth day, 29th October at 10.30, the royal relics will be moved from Dusit Maha Phasat Throne Hall, to be enshrined in the neigh by Heavenly Abode in the Chakri Maha Phasat Throne Hall. Later the same day, at 17.30, the royal ashes will be enshrined at two temples, namely Wat Ratchabophit and Wat Bovoranives. (The later was the same temple the late king studied and served his monkhood, as did many other princes and kings of the Chakri Dynasty)

The New King of Thailand

Although the new king, Maha Vajiralongkorn, formally ascended to the throne after the death of his father, (October 13th, 2016), his coronation as King Rama X won’t take place until sometime after the cremation, possibly December 2017. For more on the new king see our post The New King of Thailand.

For more on the Late King see our posts Thailand’s Coronation Day and the Kingdoms Fathers Day His Majesty King Bhumibol Adulyadej Birthday.