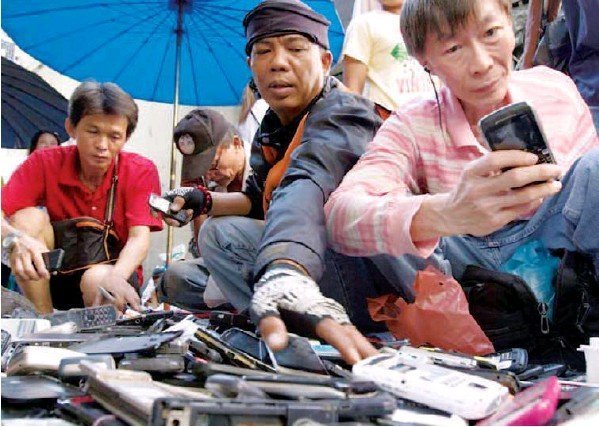 EVERY TIME a new iPhone is launched, people flock to the shops just so they can pay well above the odds for a brand new shiny one. In sharp contrast though, the other day, several people were seen on their hands and knees on the street looking for a working mobile phone in a pile of shabby old ones.

People check secondhand cellphones and batteries at a roadside stall in Bangkok.

Somjit, 46, is among 10 other vendors selling used cellphones in Khlong Thom – a weekend flea market nestled in a narrow lane between five-storey shabby buildings.

She explained that typically she buys used or damaged mobile phones from ragpickers in different parts of the city from Monday to Thursday so she can sell them at the weekend.

She then piles up her purchases on the street to sell, with prices changing according to the time of day. For instance, on Saturday mornings the price is Bt50 per piece, but it drops to between Bt10 and Bt30 late on Sunday when the market is wrapping up.

Somjit, who has been doing business of this sort since she was 16, explained that there are three types of buyers.

“There are those who like antiquelooking phones, then there are the repairers – those who buy mobiles so they can fix and sell them – and then there’s the factory guys, who buy between 500 and 1,000 pieces in any condition to sell as material.”

More than a million cellphones are thrown away in Thailand per year. A survey by the Electronic Transaction Development Agency released last year showed that an average Thai changes his or her mobile phone every six months. The reason for this change can range from keeping up with the rapidly evolving technology to getting a device with better battery life, a bigger screen or just getting one that looks good.

Few people nowadays would even consider an old-fashioned Nokia.

“Can I have the same amount today?” a middle-aged man can be heard asking Somjit.

This is Pon, a regular customer who buys about 2,000 phones every time he visits.

“I’ve been doing this business for more than a decade now. Every week I purchase some 10,000 shabby phones before separating bits such as copper, lead, silver, gold and plastic. Then these parts are collected and sold to factories,” he explained, as he begins counting and throwing phones into a sack.

Then there was a man wandering around with different mobile phone batteries of different brands. He identified himself as Tee, saying he has been in the mobile-repair business for six years now. He usually buys old phones at the market and then looks around for similar models to use as spare parts. He then fixes the mobiles and sells them on the street for prices ranging from Bt100 to Bt1,000.

“I also repair phones earning between Bt500 and Bt4,000 depending on my luck. I believe this business is going to pick up as people often change their mobile phones. However, the only thing that concerns me is that this is a small market and will not be able to deal with the rising number of used phones,” he added.

So, if you wonder where your old mobiles go, maybe visiting the Khlong Thom market behind Klang Hospital might give you an idea.