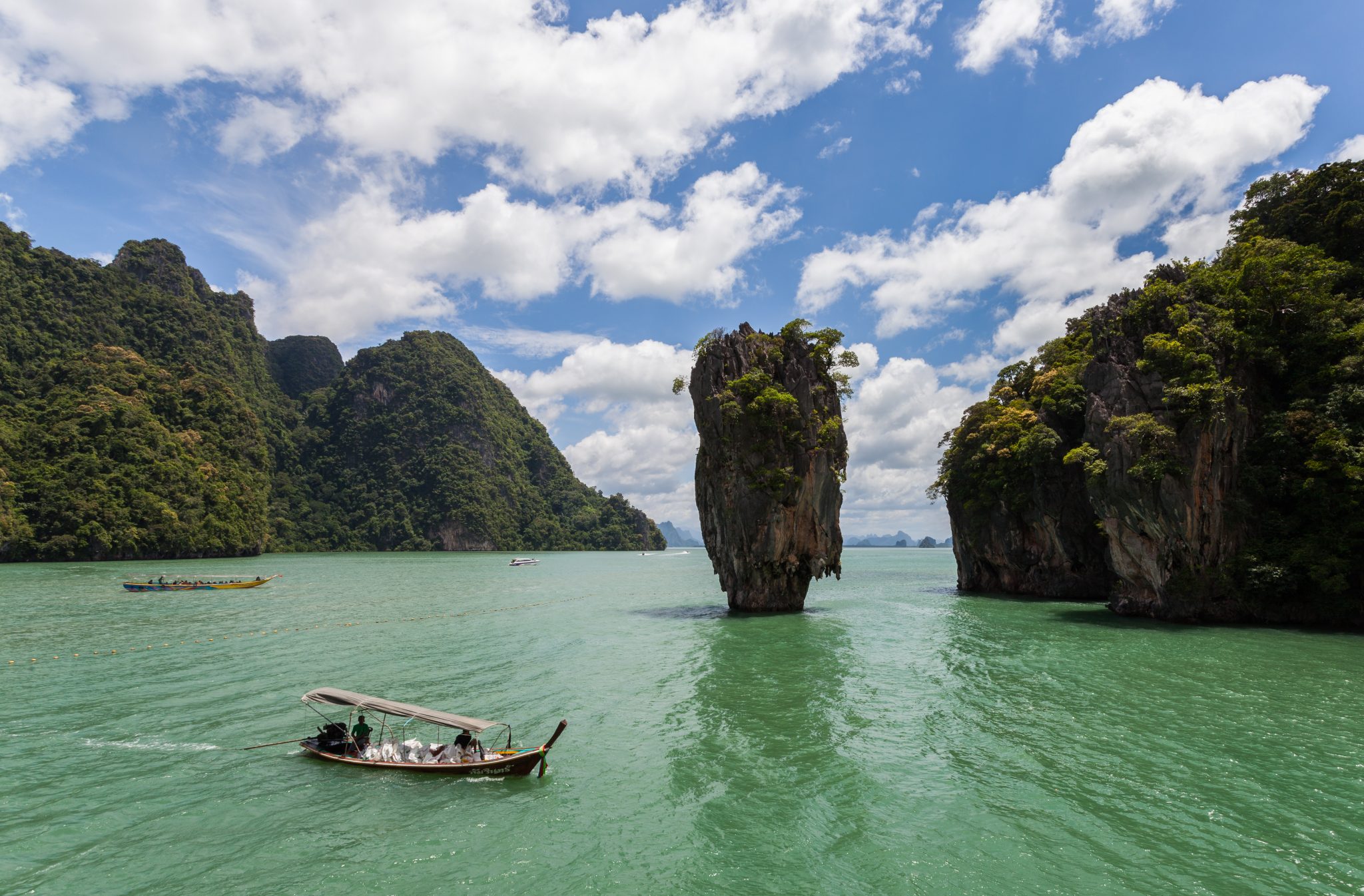 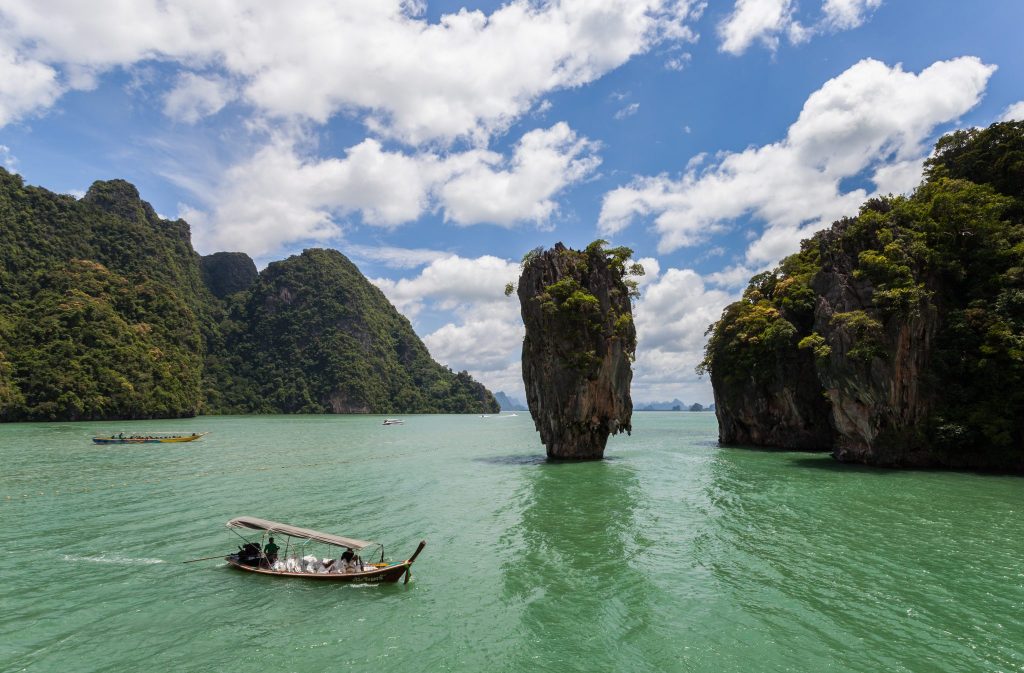 About 40 metres (130 ft) from the shores of Khao Phing Kan lies a 20-metre (66 ft) tall islet called Ko Ta Pu (เกาะตาปู,  [kɔ̀ʔ tāː pūː]) or Ko Tapu (เกาะตะปู,  [kɔ̀ʔ tā.pūː]). Since 1974, when they were featured in the James Bond movie The Man with the Golden Gun, Khao Phing Kan and Ko Ta Pu have been popularly called James Bond Island.

Khao Phing Kan means “hills leaning against each other” in Thai,[2] reflecting the connected nature of the islands. Ko Ta Pu can be literally translated as “crab‘s eye” island, and Ko Tapu can be translated as “nail” or “spike” island, reflecting its shape. With “ko” (Thai: เกาะ) meaning “island” and “khao” (Thai: เขา) meaning “hill”, the terms ko, khao, and Ko Khao are frequently interchanged in the naming of the islands.[3] After appearing in the 1974 James Bond movie The Man with the Golden Gun, Khao Phing Kan[4][5][6][7][8] and sometimes Ko Ta Pu[9] became widely referred to as James Bond Island, especially in tourist guides, and their original names are rarely used by locals.[10]

Before 1974, the island was a rarely visited indigenous area. However, it was chosen as one of the locations for the 1974 James Bond film The Man with the Golden Gun as the hideout for Bond’s antagonist, Francisco Scaramanga. After the movie release it turned into a popular tourist destination[11] that has gradually contaminated Khao Phing Kan with household litter.[10]

In 1981, the island became the most famous part of the newly established Ao Phang Nga Marine National Park.[4] Since 1998, it is forbidden for tourist boats to approach Ko Ta Pu. This measure aims to stop erosion of the limestone rocks on and near the islet that might eventually result in its collapse.[12]

Khao Phing Kan consists of two forest-covered islands with steep shores. They lie in the northwestern part of Phang Nga Bay, 6 kilometres (3.7 mi) from the mainland, amid a group of a dozen of other islands. Its western part is about 130 metres (430 ft) in diameter whereas the eastern part is about 240 metres (790 ft) long and 140 metres (460 ft) wide and is elongated northwards. The island has a few caves and two sandy beaches, in the southwest and between the twin islands. The former hosts the government office where every visitor has to pay a tax. The latter is used as the port for the tourist boats arriving from the mainland and has several souvenir shops selling items like coral and shells and plastic-encased butterflies, scorpions, and spiders.[4] Beaches and caves are regularly flooded with the tides, which have an amplitude of 2–3 metres (6.6–9.8 ft), so access to some caves is only possible during low tide.[3] The Thai name for Khao Phing Kan reflects the particular shape of the island which appears as if a flat limestone cliff tumbled sideways and leaned on a similar rock in the centre of the island.[4]

Waters around the island are only few metres deep and are pale-green in colour. The bottom is covered with silt which is brought to the Phang Nga Bay by several rivers from the north.[13]

Ko Ta Pu is a limestone rock about 20 metres (66 ft) tall with the diameter increasing from about 4 metres (13 ft) near the water level to about 8 metres (26 ft) at the top. It lies about 40 metres (130 ft) to the west from the northern part of Khao Phing Kan.

A local legend explains the formation of Ko Ta Pu as follows. Once upon a time, there lived a fisherman who used to bring home many fish every time he went to the sea. However, one day he could not catch any fish despite many attempts and only picked up a nail with his net. He kept throwing the nail back into the sea and catching it again. Furious, he took his sword and cut the nail in half with all his strength. Upon impact, one half of the nail jumped up and speared into the sea, forming Ko Ta Pu.[14]

A scientific version of the Ko Ta Pu formation says that in the Permian period, the area was a barrier reef. Then, upon tectonic movements, it ruptured, and its parts were dispersed over the area and flooded by the rising ocean. Wind, waves, water currents, and tides gradually eroded the islands thus formed, sometimes producing peculiar shapes, such as Ko Ta Pu.[13] Tide-related erosion is visible at the bottom of the rock.

In The Man with the Golden Gun, Scaramanga describes Ko Ta Pu as a “mushroom-shaped rock”, which houses two large solar panels which come up on top of Ko Ta Pu and lock on to the Sun.

The area has a tropical marine climate, which is characterized by frequent rains and stable temperature. According to the data collected between 1961 and 1990, average number of rainy days is 189 per year bringing 3,560.5 millimetres (140.18 in) of precipitation, mostly between May and October. The temperature varies between 23 °C (73 °F) and 32 °C (90 °F) and the average relative humidity is 83%.[14]

Most of the island is covered with deciduous limestone shrubland and evergreen trees. Some plants, such as Pandanus, cycads, euphorbs and prickly pear cactus grow on nearly soil-free cliffs, such as those of Ko Ta Pu, penetrating their roots into the numerous cracks and surviving on rainwater.[13]