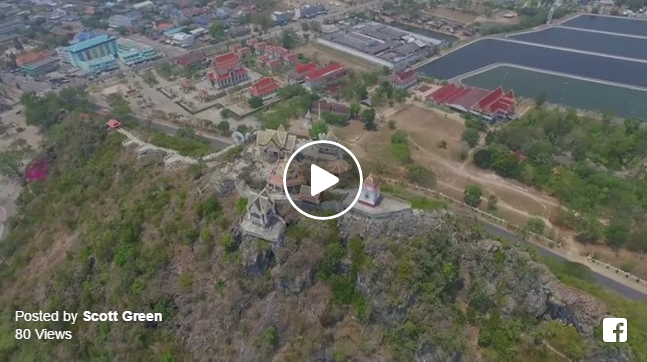 Prachuap Khiri Khan (Thai: ประจวบคีรีขันธ์, pronounced [pràʔ.tɕuàp.kʰīː.rīː.kʰǎn] pronunciation) is one of the central provinces(changwat) of Thailand located in the northern part of the Malay Peninsula, some 240 km (150 mi) south of Bangkok. Neighboring provinces are Phetchaburi in the north and Chumphon in the south. To the west it borders Tanintharyi Division of Myanmar.

Prachuap Khiri Khan covers an area of 6,367.62 square kilometres (2,458.55 sq mi). The district is located on the Kra Isthmus, the narrow land bridge connecting the Malay Peninsula with mainland Asia. The province contains the narrowest part of Thailand – directly south of the capital, it is just 11 km (6.8 mi) from the coast of the Gulf of Thailand to the border with Myanmar in the Tenasserim Hills. The narrowest point of the isthmus, however, is further south in Chumphon Province. Geographically, Prachuap Khiri Khan is a moderate plain area with altitude varying from sea level to 1,200 m (3,900 ft) above sea level. The maximum altitude can be reached in the north eastern and central west regions, which makes up approximately 30% of the area.

The long coast of the Gulf of Thailand has many sandy beaches, the most famous one being at Hua Hin, which has been a popular resort since King Prajadhipok(Rama VII) built a summer palace there. From the coast the land quickly rises into the Tanaosi Range, the mountain chain that forms the border with Myanmar, the highest elevation in the province being the 1494-metre-high Khao Luang. Due to this narrow watershed the rivers in the province are all small; the only bigger one is the Pran Buri River in the north of the province. Among the smaller rivers is theKhlong Kui.[1]

Khao Sam Roi Yot National Park was established in 1966 to protect Thailand’s largest freshwater marshes. The park contains some mangrove woods and mudflats. Most of the marshes were converted into shrimp farms, despite being in a national park.