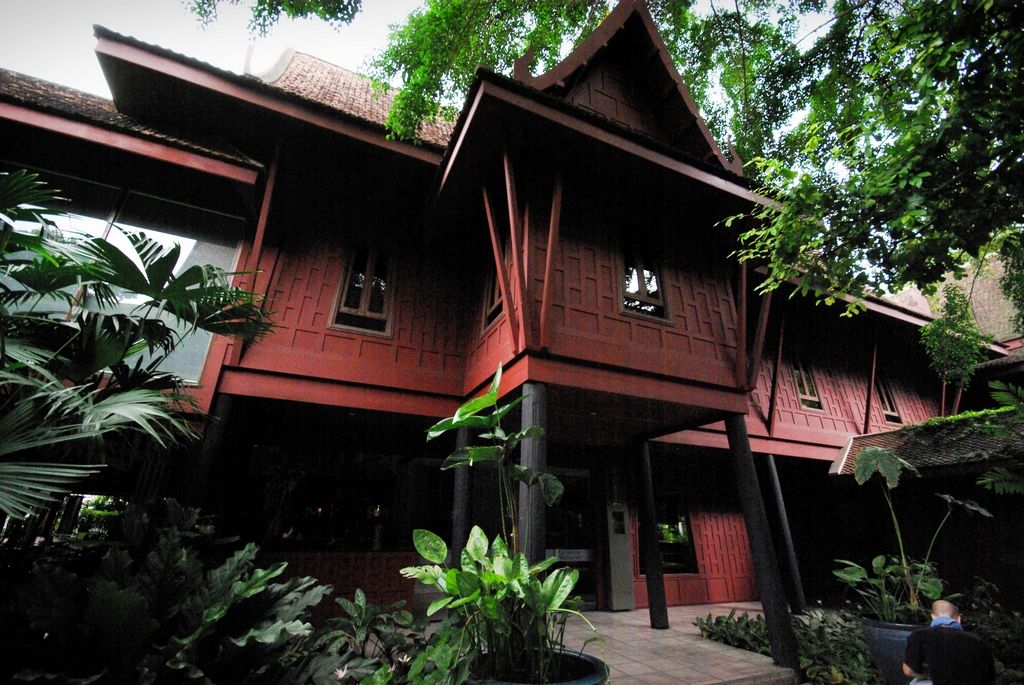 Jim Thompson. James Harrison Wilson “Jim” Thompson, (born 21 March 1906 — disappeared 26 March 1967) was an American businessman who helped revitalise the Thai silk industry in the 1950s and 1960s. At the time of his disappearance he was one of the most famous Americans living in Asia. Time magazine claimed he “almost single handedly) saved Thailand’s vital silk industry from extinction”.His disappearance from the Cameron Highlands generated one of the largest land searches in Southeast Asian history, and is one of the most famous mysteries in the region. 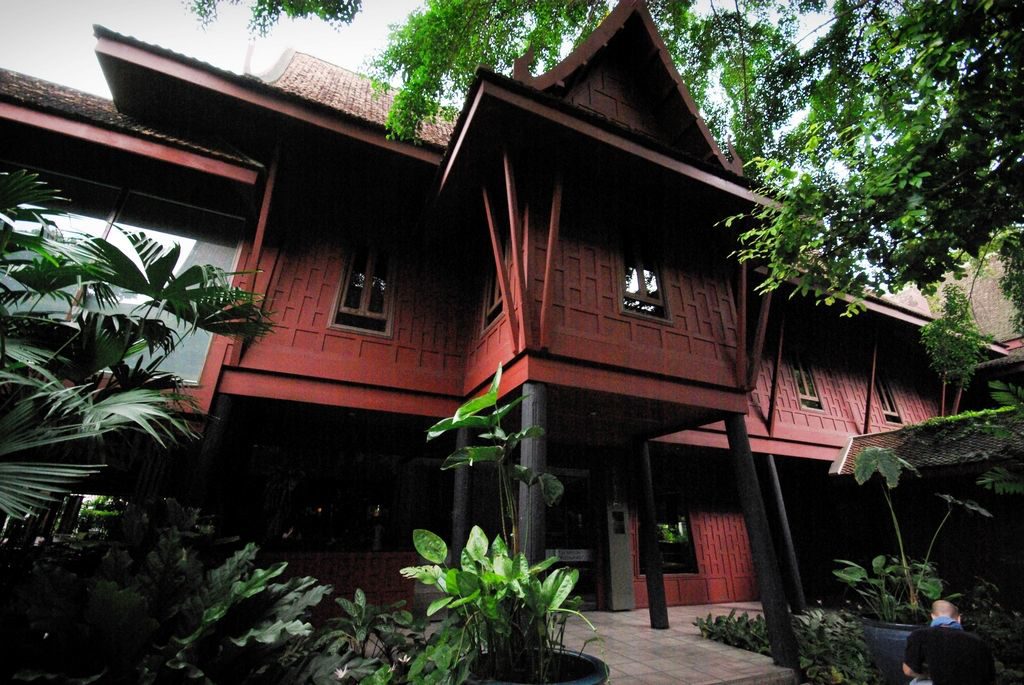 Jim Thompson was born in Greenville, Delaware, USA. He was the youngest of five children of Henry and Mary Thompson. His father was a wealthy textile manufacturer; his mother was the daughter of James Harrison Wilson (1837–1925), a noted Union general during the American Civil War.

Thompson spent his early years of education at St. Paul’s boarding school. He graduated from Princeton University in 1928. Post-graduate studies followed at the University of Pennsylvania’s School of Architecture, but he did not complete his degree at this institution due to his weakness in calculus.

From 1931 to 1940, he practised in New York City with Holden, McLaughlin & Associates, designing homes for the East Coast rich and a band shell in Rehoboth Beach, Delaware. His blueprints were reviewed and signed off by certified architects.

Throughout the 1930s, he led an active social life and sat on the board of the Ballet Russe de Monte Carlo. He also became politically active, but his liberal politics alienated him from his conservative family.

In 1941, he quit his job and enlisted with the Delaware National Guard regiment. Before the outbreak of the Second World War, he was transferred to a military outpost in Fort Monroe, Virginia. While he was here, he got to know Second Lieutenant Edwin Fahey Black, a fresh graduate from the US Military Academy, West Point. It was Black who encouraged him to join the Office of Strategic Services (OSS), the forerunner of the Central Intelligence Agency.

At the height of the Second World War, Thompson was recruited by William Joseph Donovan (1883–1959) to serve as an operative in the OSS.

His first assignment was with the French resistance forces in North Africa. He was then sent to Europe. After Victory in Europe Day (7–8 May 1945), he was transferred to Ceylon (now Sri Lanka) to work with the pro-Allied Seri Thai or Free Thai Movement. Their mission was to help liberate Thailand from the occupying Japanese Army. The group had the support of Pridi Panomyong, the regent to King Ananda Mahidol of Thailand and Seni Pramoj, the Thai ambassador to the United States.

In August 1945, Thompson was about to be sent into Thailand, when the Surrender of Japan officially ended World War II. He arrived in Thailand shortly after Victory over Japan Day and organised the Bangkok OSS office. It was here he got to know Mrs. Constance (Connie) Mangskau, an Allied Services translator, who later became one of his closest friends.

In the spring of 1946, Thompson went to work as military attaché at the United States legation for his former Princeton classmate Charles Woodruff Yost, the US Minister to Thailand. Thompson used his contacts with the Free Thai and Free Lao groups to gather information and defuse conflicts on Thailand’s borders. Working with him in the Legation was Kenneth Landon, an American missionary whose wife, Margaret Landon, was the author of Anna and the King of Siam, which was the inspiration for a 1946 drama of the same name, and the The King and I in 1956.

In late 1946, Thompson headed for home to seek his discharge from the army. After his divorce from Patricia Thraves (1920-1969), he returned to Thailand to join a group of investors to buy The Oriental Hotel in Bangkok. While working on its restoration, he had some differences with his associates and this resulted in him giving up his shares. He subsequently switched his focus to silk.

Thompson’s private collection of silk garments which were used for the stage musical The King and I.

In 1948, he partnered with George Barrie to found the Thai Silk Company Limited. It was capitalised at US$25,000. They each bought eighteen percent of the shares. The remaining sixty-four percent were sold to Thai and foreign investors.

The firm achieved a coup in 1951 when designer Irene Sharaff made use of Thai silk fabrics for the Rodgers and Hammerstein musical, The King and I. From then on, the company prospered.

Besides inventing the bright jewel tones and dramatic colour combinations today associated with Thai silk, Thompson raised thousands of Thailand’s poorest people out of poverty. His determination to keep his company cottage-based was significant for the women who made up the bulk of his work force. By allowing them to work at home, they retained their position in the household while becoming breadwinners. It was only after Thompson’s disappearance that the Thai Silk Company relocated its weaving operations to Korat, a city which serves as a base of operations for the Royal Thai Army. Although it abandoned home-based weaving in favour of factories in the early 1970s, the Thai Silk Company’s Korat facility looks more like a landscaped campus than a factory.

Thompson’s “House on the Klong” 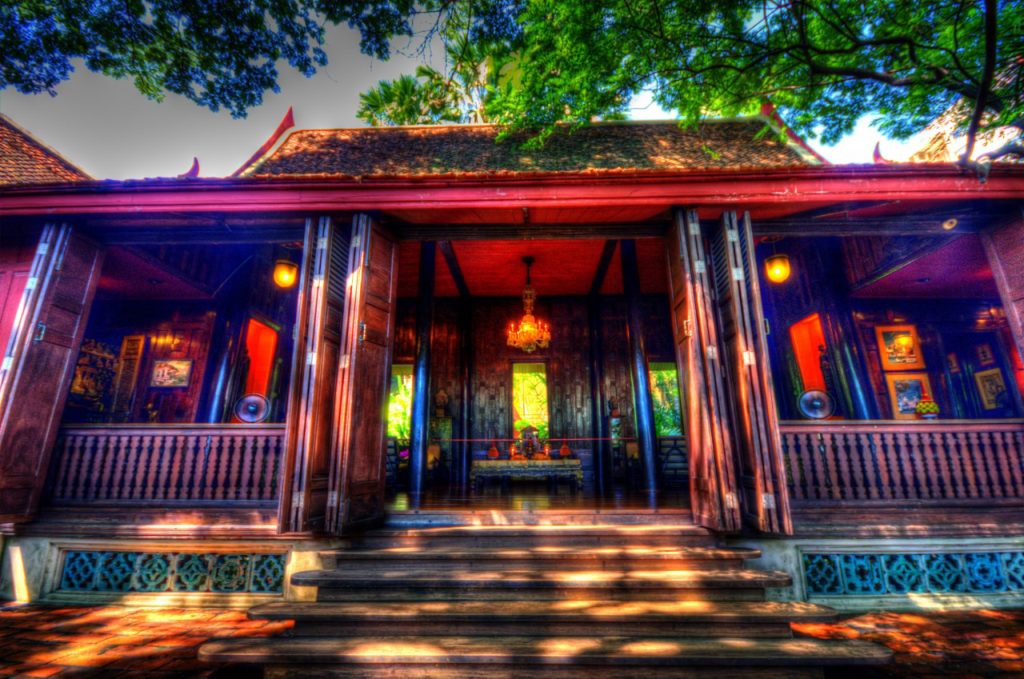 Thompson was unlike any other figure in Southeast Asia. He was an American, an ex-architect, a retired army officer, a one-time spy, a silk merchant and a renowned collector of antiques. Most of his treasures, if not all, were amassed after he came to Thailand.

In 1958, he began what was to be the pinnacle of his architectural achievement – the construction of a new home to showcase his objets d’art.

Using parts of old up-country houses – some as old as a hundred years – he succeeded in constructing a masterpiece that involved the reassembling of six Thai dwellings on his estate. Most of the units were dismantled and brought over by river from Ayutthaya, but the largest – a weaver’s house (now the living room) – came from Bangkrua. On arrival, the woodwork was offloaded and pieced together.

In his quest for authenticity, he saw to it that some of the structures were elevated a full floor above the ground. During the construction stage, he added his own touches to the buildings by positioning, for instance, a central staircase indoors rather than having it outside. Along the way, he also reversed the wall panels of his quarters so that it now faced inside instead of it having an external orientation.

After he was through with its creation, he filled his home with the items he had collected in the past. Decorating his rooms were Chinese blue-and-white Ming pieces, Belgian glass, Cambodian carvings, Victorian chandeliers, Benjarong earthenware, Thai stone images, Burmese statues, and a dining table which was once used by King Rama V of Thailand.

It took Thompson almost a year to complete his mansion. Now a museum, the Jim Thompson House can be reached by public or private transport. At 6 Soi Kasemsan (2) Song on Rama I Road, it is open daily from 9 am to 5 pm. The last guided tour of the complex is at 5 pm.