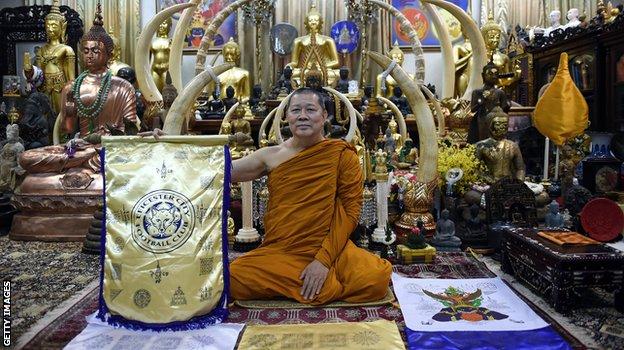 Thailand is falling in love with the Foxes

Thailand is falling in love with the Foxes. Leicester City are five points clear at the top of the Premier League and have just been confirmed as participants in a pre-season tournament featuring the world’s elite teams. Their transformation from Midlands also-rans to global power is well under way and nowhere is it more evident than in Thailand, the home of the club’s owners…

A year ago, as Leicester City languished at the bottom of the Premier League and looked almost certain to be relegated back to the Championship after just one season in the top tier, you could spend a couple of hours at the club shop in central Bangkok and not see a single customer.

The rows of blue shirts remained untouched, the games playing on the large-screen TV unwatched apart from by the staff, who had little else to do. By the end of last year, it had closed down.

The club’s owner, King Power, had done its best to raise the profile, plastering Leicester merchandise all over its shops at Bangkok’s busy international airport, where it has had an effective monopoly for the past decade on the duty-free spending of the more than 50 million passengers who pass through it.

But outside the airport it was hard to wean Thais off their affection for Manchester United, Liverpool and Chelsea.

Today you cannot buy a Leicester shirt anywhere in Thailand. They have all sold out, and King Power has had to ask fans to order them from the UK.

The astonishing rise of the Midlands also-rans to league leaders this season is starting to impress Thai fans; even those who support other sides.

“I’m a Liverpool fan but secretly I’m rooting for Leicester to win the league,” said Sorrapat Sriparn, while watching his side Muan Thong United play. A few rows along, Suphanchai Ketbeungkan, a long-term Chelsea fan, said he was also inspired by the idea of a Thai-owned team that had been so close to relegation last season winning the title.

At a Sunday practice match in Bangkok, unable to buy the real thing, I was reduced to showing a picture of a Leicester shirt on my laptop to a Thai boys’ team during the half-time break. They all recognised it, and knew the club was Thai owned. Would they consider supporting Leicester? They were not so sure, a few hands going up tentatively. Most of them were, predictably enough, Manchester United or Liverpool supporters.

But if Leicester are to capitalise on this season’s success and cement a permanent place in the hearts of Thai football fans, its owner is going to have to invest more in raising the profile among younger supporters, whose loyalties are not yet fixed.

At the end of last year, the club began what it calls football clinics, sending coaches led by Thailand’s best known goalscorer, Kiatisak ‘Zico’ Senamuang, to several Thai schools to train young players, with a select few to be sent to the UK. But Arsenal, for example, have a substantial and well-established soccer school in Bangkok, used by hundreds of children every week.

“Leicester’s rise has made a strong impression on the fans,” says football commentator Aekarach Kengtooktang. “But it will take a lot more time to build up their fan base. Big teams like Manchester United or Liverpool have earned their fans in Thailand from their performances and their fame over decades. This is a historic moment in the English Premier League but it has been only two years, so we have to wait and see.”

Football is huge in Thailand, despite the lacklustre record of the national team and the often scrappy quality of local games – although there has been a marked improvement in recent years and a subsequent rise in support for local teams. Some Thais follow the Spanish, German or Italian leagues, but most prefer the more physical game played by English sides.

As a consequence, some Thai tycoons have seen buying an English club as a way to raise their status and profile at home.

The trend was started by the controversial former prime minister Thaksin Shinawatra, who bought Manchester City in 2007 after he had been forced from office by a military coup, but then sold the club a year later. Thailand’s biggest beer maker, Chang, has had a sponsorship deal with Everton since 2004. Then, following King Power’s purchase of Leicester in 2010, the country’s biggest seafood processor bought Sheffield Wednesday, and another Thai consortium bought Reading. Thailand is falling in love with the Foxes

It is starting to look as though King Power has hit the jackpot.

The company’s virtual monopoly on duty-free sales in Thailand is controversial, and the owner, Vichai Srivaddhanaprabha, is publicity-shy – he refused an interview for this article.

But King Power has had to respond to the growing fan base in Thailand, and now lays on free food and beer at its futuristic headquarters in Bangkok for the big games. Lightly clad models bearing strategically placed blue fox tattoos mingle with the family crowd, posing with footballs and life-size cut-outs of Jamie Vardy and Riyad Mahrez.

Asked why they now support the Siamese Foxes – as they like to call them here – patriotic pride in seeing a Thai-owned side doing so well loomed large. And the roar from the crowd when Mahrez scored the only goal against Crystal Palace was every bit as loud as anything at Selhurst Park.

Everything now hangs on what happens in Leicester’s seven remaining games. But if they do pull off the fairytale ending, they can tap into a bottomless well of passion in this football-mad nation of 68 million. The £39m King Power spent acquiring the club six years ago, and the £100m or so it has spent since, look like spectacularly good investments.

How Thailand is falling in love with the Foxes