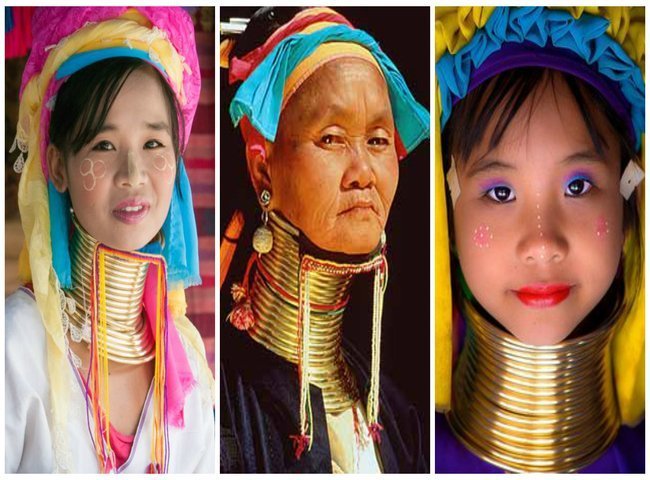 Hill Tribes Thailand Padaung Travel Thailand. Where the ancient Padaung People better known as ‘Long-Necks’ or even ‘Giraffe People’ have been branded as ‘Cannibals’, when Divorce can leave you bed ridden. Slavers, dragons, tigers and beauty are an explanation for their customs and Premarital sex results in a fine

What’s in a name

Hill Tribes Thailand Padaung. When writing about the Padaung one must first explain their place in the family tree of the Karen people, as while there is an abundance of information on the Karen there is some confusion and very little written on the Padaung.

The Burmese term “Karen” probably came from the word “Kayin, or Kayan” referring to the particular group of peoples in eastern Myanmar (Burma) and western Thailand who speak closely related but different Sino-Tibetan languages. In Thailand the Karen are known as ‘Thai Yai’. The term “Karen” itself was considered a derogatory term in Burma until Christian missionaries brought respect to it in the late eighteenth century.

Padaung is a Shan term for the Kayan Lahwi, who are a sub-group of the Red Karen (Karenni: People who now inhabit many areas of northern and north west Thailand). The Kayan can be further divided into the following sub groups (See flow chart below). Until very recent history the different Karen sub-groups did not recognize each other as belonging to the same main group as the languages/dialects were vastly different from each other, even though their social, religious and commercial traits were very similar.

What makes the Padaung immediately stick out from the multitude of tribes in the Karen group and its many sub-groups is the brass rings they wear around the necks, for which the world has given them yet further names such as the ‘Long-Necks’ or even ‘Giraffe People’.

It is reported the Padaung in Northern Thailand refer to themselves as Kayan or Laku and while many do not object to being called Padaung or Long Necked, (they themselves use the terms Long and Short to describe those among them that do or do not wear neck rings) they find the term Giraffe offensive.

The early history of the Karen remains problematic, and there are various theories regarding their migrations. The most recognized would support that Karen peoples originated in the north, possibly in the high plains of Central Asia, and traveled in stages through China into Southeast Asia, probably after the Mon but before the Burmese, Thai, and Shan reached what is now Myanmar and Thailand. Seventeenth-Century Thai sources mention the Kariang and Karen lords are known to have ruled three small semi-feudal domains in Thailand from the mid-nineteenth century until about 1910

According to Kayan legends, the Kayan settled in the Demawso area of Karenni State (Kayah State-Burma) in 739 AD. Today they are to be found mainly in Myanmar states of Karenni (Kayah) State around Demawso and Loikow, in the southern region of Shan State and in Mandalay’s Pyinmana and Karen’s Than Daung Township.

A 2004 estimate puts the Padaung population at approximately 130,000 in Myanmar with approx. 600 in Thailand, There are only thought to be 120 Padaung who wear the neck rings in Thailand residing mainly in the three villages in the Northern Province of Mae Hong Son (Huay Sua Tao, Ban Nai Soi and Huay Pu Keng). While others live in the Ban Mai Nai Soy refugee camp (where tourists are not received), Pang Moo Sub-district, Muang District, Mae Hong Son Province. The camp was first established in 1989 in Karenni State, Burma but had to relocated on many occasions due to the fatal attacks by the Burmese army, it was eventually moved to its present position in Thailand in 1996.

In recent history the government of Myanmar began discouraging neck rings as it struggled to appear more modern to the developed world and through the governments disinformation people in the capital Yangon have followed the government-inspired idea that the Padaung are actually ‘Cannibals’ (Pascal Khoo Thwe 2002).  Consequently, many Padaung women in Myanmar began breaking with tradition.  In Thailand the practice has flourished in recent years because it draws tourists who bring revenue to the tribe and to the local businessmen who collect an entrance fee of 250 baht per person. It is this exploration of the Padaung that is now causing concern to many including the UNHCR and why more and more tour companies are refusing to go to the villages.

The Truth Behind the Neck Rings

There are many different accounts of why the Padaung practice this bizarre custom. It has been suggested that the coils give the women resemblance to a dragon, an important figure in Kayan folklore. Their own mythology explains the rings are to prevent tigers from biting them! Others have reported that it is done to make the women unattractive so they are less likely to be captured by slave traders.

The most common explanation is that an extra-long neck is considered a sign of great beauty and wealth and that it will attract a better husband. Adultery, though, is said to be punished by removal of the rings. In this case, since the neck muscles will have been severely weakened by years of not supporting the neck, a woman must spend the rest of her life lying down. According to Paul and Elaine Lewis in ‘Peoples of The Golden Triangle’, adultery and divorce among all Karen groups is extremely low.

What-ever the reason is for the custom it is not a new fad and is actually centuries old; the Italian explorer Marco Polo was the first European to describe the tradition in the 1300’s, yet is only in recent history that the people are openly accessible to the world. It should be noted the Padaung also wear coils around both their knees and ankles.

The neck coils are adorned on females around 5 years of age and are gradually increased as they mature. The rings can be found to a length of approx. 15 inches (38 cm), with 16-22 coils, weighing between 5 – 20 kilos. It is this combined weight which acts to push down the collarbone, compressing the rib cage, and pulling up about four thoracic vertebrae into the neck. The coils don’t actually elongate the neck; they simply over time depress the collar bones giving the illusion of longer necks.

It is further believed that only girls born on a Wednesday with a full-moon could wear the rings around their necks, today there are more women wearing the rings in Thailand than maybe still in Myanmar.

The Padaung traditional religion, which they call ‘Kan Khwan’,  is animistic, rooted both in nature and in their ancestral spirits. This form of religion is believed to have been practiced since the people migrated from Mongolia during the Bronze Age. It includes the belief that the Kayan people are the result of a union between a female dragon and a male human/angel hybrid.

The people have a strong belief in omens and nothing is done without reference to some form of fortune telling, including breaking thatch grass, but most importantly consulting chicken bones. Dreams are also used to make predictions. This is especially true during the annual festivals and during “Cleansing Ceremonies” which are held when a family has encountered ill fortune.

Today the Padaung people follow a number of other religions including Buddhism and Christianity, which many still combine with their traditional beliefs

Language and System of Writing

The Karen as a whole do not have a pre-modern written language, their history was/is passed down to the next generation in stories and songs. Their tales tell of them as orphans, who lost their writing system after God handed it down to them, which would be later returned by visitors from a far away land. Many Karen thought this promise had finally been fulfilled when Italian Christian missionaries in the 19th Century descended on them, this possibly explains why we find today that almost 50% of the Karen people in Thailand have lost their ancient traditions,  beliefs and original identity to the Christian faith.

A village is headed by a chief or headman and a council of elders. The headman’s position is hereditary and his traditional roles are with the help of the council of elders to deal with village disputes and equally important to conduct religious ceremonies, where he is seen as the spiritual link to the village spirits.

The two major traditional religious practitioners in each village, the chief/headman and the eldest woman of the senior line of the matrilineage.

There are also people endowed with ‘pgho’, (supernatural power), including prophets (wi) and medicine teachers (k’thi thra). There are also witches or “false prophets” (wi a’bla) who put their power to evil purposes.

While the Padaung as with the vast majority of the Hill Tribes, were once Swindon (slash and burn) subsistence farmers, they have within a generation converted to cultivating wet rice along with other crops such as  tea, maize, legumes, yams, sweet potatoes, peppers, chilies, and cotton. While in the lower valleys they also grow Tobacco, betel leaves and nuts, and fruits including bananas, durians, and mangoes. The Padaung will also raise live stock for sale or for their ceremonies and/or consumption. Wealth amongst the people is counted in livestock and rice, with elephant owners enjoying the highest status.
Padaung males still hunt for birds, squirrels, lizards, deer, and wild pigs. They use crossbows, slingshots, snares, traps, and guns, while women and children may collect roots, leaves, bamboo shoots, herbs and bark for medicinal purposes, wild fruits, frogs, small lizards, insects, paddy crabs, ant larvae, honey, beeswax, mushrooms, firewood, weeds for pig food and snakes.

Proposals, which require parental approval, are made by the young man or woman, although a go-between is often used. Premarital sex is prohibited, and 15 to 20 percent of bridegrooms pay a fine for having broken the rule. The majority of unmarried Karen women wear a white robe to indicate that they are as yet unmarried. However, as soon as a union is approved the bride will begin weaving a different colored dress for her wedding day

The marriage ceremony involves rituals to the Lord of Land and Water marking the union of the new couple and the husband’s incorporation into the bride’s parents’ household. The ritual and wedding feast in the bride’s village can last three days. After marriage the bride gives up her long white dress for the black embroidered blouse and red-and-black tubular sarong of married women; men continue to wear the traditional red fringed shirt.

Marriage is considered a very important part of a woman’s life; so much so, that if a woman dies before marriage, she is nonetheless buried (or cremated) in married women’s clothing. This, they believe, reduces the chances of malevolent spirits preventing her from entering the afterlife.