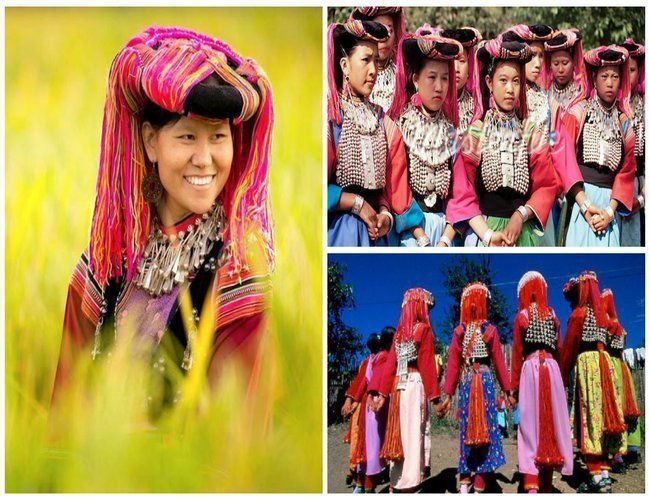 Hill Tribes of Thailand The Lisu

The Lisu of Northern Thailand and their unique culture

Hill Tribes of Thailand The Lisu. Often referred to as “Lisor,” they refer to themselves as “Lisu.” The word “Li” comes from the word “eelee,” which means custom, tradition, or culture; “su” means “person.” The combined meaning is: a group of people who share a deep pride in their customs, traditions, and culture. This can be seen as their traditional dress which is not only alive with vibrant colours; it speaks of their desire to keep to their age old traditions. The Lisu are considered to use the greatest variety of colors of all the hill tribes and maintain their traditional dress on a daily basis leaving their very best for special occasions

Their language falls into the Yi or Ngwi branch of the large Sino-Tibetan family of languages. It is thought that originally, the Lisu were from the area near the head of the Salawan waters and the Mekong River, located in northern Tibet, they later travelled to the northwest portion of Yunnan province in the People’s Republic of China. The Lisu first came to into Thailand around the year 1921. Lisu history is passed from one generation to the next in the form of songs as they have no written language of their own. Today, these songs are so long that they can take an entire night to sing.

Although most Lisu in Thailand especially younger children speak Thai there first Language is Lisu, many also still speak Yunnanese.

The Lisu are divided into two sub-groups: the striped Lisu and the black Lisu. The majority in Thailand are of the striped Lisu sub-group. With most of the black Lisu, spread out across China, Burma, Thailand and the Indian state of Arunachal Pradesh. In Thailand they can be found across nine different provinces: Chiang Rai, Chiang Mai, Mae Hong Son, Phayao, Tak, Kampaengphet, Phetchaboon, Sukhothai, and Lampang, with a total population in Thailand of approx 55,000.

Lisu clans are patrilineal – family membership derives from and is traced through his or her father’s lineage. The six main clans are roughly translated into English as: Bear, Buckwheat, Fish, Hemp, Honey and Wood.

Like many other Hill Tribes of Thailand including the Akha and Lahu; the Lisu practice a religion that is part animistic, part ancestor worship, mixed within complex local systems of place-based religion. The Lisu believe in a single creator, Wu Sa. Besides the creator there are many forms of spirit at work in their daily lives, from spirits of deceased ancestors to spirits of forests and other inanimate objects. The Lisu also probably pre-date the Roma in their belief in vampires and they have their own version of werewolf a ‘Were tiger’

The Lisu are one of the most spiritual of all of the hill tribes of Northern Thailand and every household in a village will have its own spirit house plus each village usually has a shrine dedicated to the ancestor spirit known as Aphahmowhee.

Kwa-Too (Leader of the community): This person is elected to the position by the villagers and his role is to arbitrates in matters of dispute and assesses and levies fines and other forms of punishment to offending villagers

Cho-Mo-Cho-Dtee (Head elder): Normally the eldest living male in the village who is respected by the younger members of the village and with the Kwa-Too makes important village decisions.

Meu-Meu-Pa (Ceremonial leader): The holder of this position is chosen by way of ah-bpa-mo (a fortune-telling ceremony). Each village can have only one Meu-Meu-Pa. The ceremonial leader’s responsibilities are to act as a medium between the great Spirit and the villagers, and to announce and conduct ceremonies to observe the various sacred days of the year.

Nee-Pa (Spirit doctor): This individual is elected and appointed by the spirits of the ancient ancestors of the family dynasty and is responsible for maintaining the connection between the spirit world and the world of humans.

The Lisu people hold a name ceremony for newborns as they believe that newborns must be named within three days being born. If a family fails to name their child in this time, a spirit will name and claim the child as its own. The child’s life would then be in danger.

The Six Names of a Lisu child
Each Lisu individual is given multiple names. Unlike one’s nickname, these names must stay with the individual for his or her lifetime. Using a newborn Lisu female for example,

The Lisu believe that even after death, the deceased still needs to work for food. In order to keep the departed from going hungry, they purchase land from the spirits of the forest, the hills, and the pathways that pass through the site. These spirits are the real owners of this land. To do this coin will be tossed in each of the four cardinal directions surrounding the burial site. Next, rice, corn and many other plant and vegetable seeds will be sprinkled around the purchased land for the deceased to harvest food for themselves once in the spirit world

After sprinkling the seeds, silver coins will be tossed to the left side of the burial site. This is to purchase firewood from the local spirit for the deceased to use in cooking food. Next, silver coins will be tossed to the right side of the burial site to purchase water for the deceased to use for bathing and drinking. The spirit doctor or “Nee Pa” will utter a prayer to the spirit of the deceased, to inform them that they have not yet risen up to be born again and in the meantime please live off the land here, which has been purchased for you. Do not go roaming around elsewhere for any reason.

The Lisu have an ancient legend regarding the beginning of life, which goes something like this: Long ago there was a giant flood and from it only two people survived a brother and his sister. Once the water had receded, the pair set out in search of other survivors, but to their dismay, they found no one. They realized that if
they did not reproduce then mankind would disappear off the face of the planet forever. Still, they couldn’t get over the fact they were brother and sister. Finally, they decided to consult the spirits.

Seeing a grinding stone and a mortar on top of a hill, the pair separated the two parts and rolled them down opposite sides of the hill. When the grinding stone reached the base of the hill it refused to stop rolling. Instead, it persisted in rolling all the way around to the other side of the hill and reuniting with the mortar, ending up in exactly the same position it had been when on top of the hill. It did not matter what objects the pair used to test their fate, the results were identical each time. So they were convinced that the spirits had given their blessing to the union. They produced a son and a daughter who marked the new birth of the Lisu tribe.

A big thanks to Virtual Hilltribe Museum for a good part of the information in this post. http://www.hilltribe.org/lisu/ and the pictures from the brilliant Barbara at www.siamesedreamdesign.com