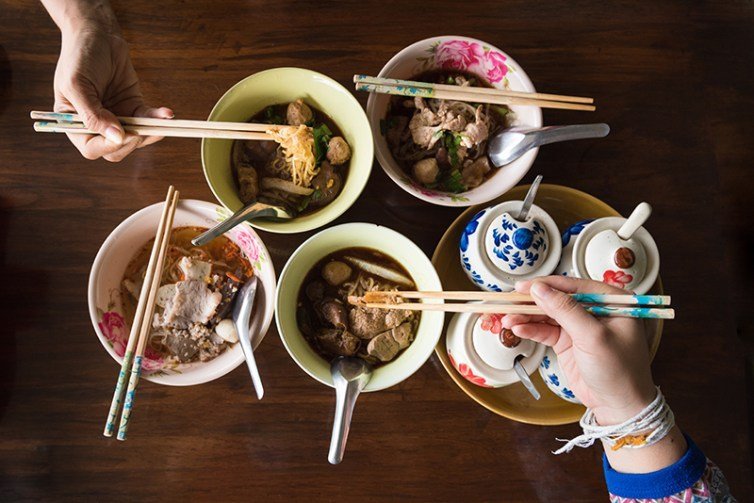 Food Tourism. Thailand has become synonymous with good food. Thai cuisine has an international reputation as good as they get. From humble street food to posh restaurants, from tried and tested to trendy and new, from common and convenient kuai tiao (noodle soup) to popular khao man kai(chicken and rice) to spicy som tam (papaya salad), and other dishes too many to list, Thai streets and restaurants are teaming with food famous the world over.

Food Tourism. The Tourism Authority of Thailand (TAT) has been playing a significant role in getting the kingdom’s gastronomy word out. Their priority efforts to increase awareness and appreciation for gastronomy tourism is partly driven to build bridges with the agricultural sector, which remains the country’s biggest employer and largest industry overall.

Food Tourism. The Thai economy revolved around agriculture for centuries and well before tourists were arriving in measurable numbers. TAT wants to highlight that and blend the two. Many Thai dishes also place great emphasis on nutritional ingredients including high-value herbs, which helps TAT focus on health and general wellness.

Promoting gastronomy tourism makes economic sense, too. Food tourism can generate billions of dollars in revenue, according to the UN World Tourism Organisation (UNWTO), with international visitors to Thailand spending about 20 percent of their travel budget on food.

Food Tourism. TAT is closely involved with the UNWTO and in 2018 hosted the 4th UNWTO Forum on Gastronomy Tourism. Thailand was the first country in Asia to host the event and participants raved about the smiling Thai hospitality. And the food. The agenda focused on advancing cultural and culinary issues across the 10-member states of the Association of Southeast Asian Nations (ASEAN) and Asia-Pacific region.

In a significant move in recent years, TAT teamed up with century-old France-based Michelin renowned the world over for their restaurant star rating system. The partnership produced the first Michelin Guide Bangkok. The inaugural Bangkok guide highlights 98 restaurants including international, Asia and mostly Thai with 28 Thai street-food stalls. A first for Michelin.

The Michelin Guide Bangkok, Phuket and Phang Nga 2019 was recently released. It increased the Bangkok section to include cities surrounding the capital and introduced Phuket island off the west coast and Phang Nga, the province on the mainland next to Phuket. The edition includes 217 dining locations, as well as lodging. Three restaurants in Bangkok that previously had stars kept theirs even with new chefs running the restaurants. They are Elements, Nahm, and Saneh Jaan. On Phuket, PRU restaurant was award a star. Located at a luxury resort, it uses fresh ingredients grown on its own 96-hectare organic farm.

Food Tourism. The Michelin Guide Thailand project will run until 2022 and guidebooks similar to the one about Bangkok, Phuket and Phang Nga will cover other popular Thai destinations.

Around the same time as the launch of the Michelin Guide Thailand project, TAT also hosted the Thai-Licious Journey Two web series to the kingdom with one of America’s most celebrated chefs of Thai cuisine and the first Amazing Thailand Culinary Ambassador, chef Andy Ricker. Owner and chief chef of Pok Pok restaurants in Portland, Oregon on America’s west coast, and New York City on the east coast, Ricker is also a bestselling cookbook author. He received the Bib Gourmand Awards in 2017 for the 2018 Michelin Guide New York City. He is one of many chefs branding Thai cuisine around the world.

The second Thai-Licious web series season highlighted TAT’s increasing focus on gastronomy tourism with culinary highlights in Thailand’s East Chanthaburi and Trat provinces, and in the south in Chumphon. The series showed how experiencing Thai cuisine is the perfect way to start understanding the kingdom’s culture and way of life.

TAT’s gastronomy tourism efforts put the spotlight on how regionally diverse Thai cuisine is, with each of the kingdom’s five regions having distinct cuisines, and in some cases small areas and even individual towns within an area being known for their specialty. If you are passing though Phetchaburi south of Bangkok Thais will suggest you pick up some khanom mo kaeng (egg custard). The coastal areas each have their special seafood dishes.

The variety of cuisine in Thailand is mind boggling. Thai food is famous all over the world. It is rare if a major city in any country does not have a Thai restaurant. That could be a small simple takeout establishment, or fine-dining. They are all helping brand Thai cuisine as world famous. But the best way to know about one of the world’s most identifiable cuisines remains by word of mouth.

Thai food can be enjoyed anywhere, but it is best in Thailand in the atmosphere only found in the mid of local communities.