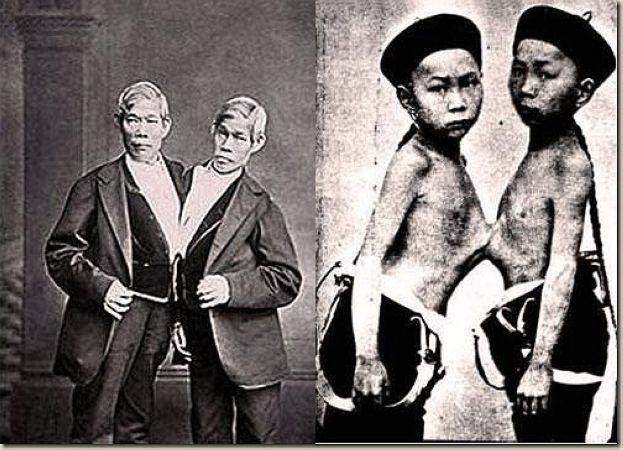 The brothers were the original Siamese Twins, who provided the name for all who suffer this accident of birth. Born in 1811 in a fishing village 60 miles from Bangkok, they were conjoined just above their waists, their father was a Chinese fisherman and their 35-year-old mother was half-Chinese, half-Malay, they named boys, In and Jun (anglicised to Eng and Chang). While Chang (on the left) was always slightly shorter he was the more dominant of the twins, while Eng would rarely speak out of turn.

Their mother encouraged the boys to exercise, stretching their connecting ligament so that it gradually grew to more than five inches, which was enough to enable them to run, swim and handle a boat. Crucially, they were able to bow 18 times, as custom dictated when they were presented to the king of Siam, Rama III.

The brothers might have passed in obscurity had they not been spotted by a British merchant when they were adolescents.

Robert Hunter at first thought the twins were ‘some strange animal’ when he saw them swimming in a river. But he quickly recognised their commercial potential and persuaded their impoverished mother, to contract her sons to Hunter for 30 months  (Their father had died while they were still young) and that the twins should accompany him back to the West to be exhibited as a public curiosity. It took him a further 5 years to win the approval of the then King for the boys to travel to the USA.

The then 17-year-old twins made their stage debut in Boston where they were exhibited as ‘The Siamese Double Boys’ and were an immediate sensation. In theatres and halls across the U.S. they performed for four hours a day, six days a week, entertaining onlookers with somersaults, backflips, an uncanny ability at draughts and chess, and their prodigious strength, they could carry a 20-stone man.

On returning to the US from a year in England, the shrewd twins who were  natural showmen, realised that their deformity was a path to a fortune dispensed with Hunter and hired their own manager, they could now insisted on being treated with respect and spent the next seven years on the road.

Yearning for a Quieter Life

The twins eventually became tired of being stared at and sort a quieter life away from the limelight. They chose North Carolina as their home, while it was a slave state under U.S. law, the twins counted as white. They became U.S. citizens, realising only when they got to the naturalisation office that they had no surname. They borrowed ‘Bunker’ from the man standing behind them in the queue.

Canny and industrious businessmen, they opened a store and, buying 200 acres, branched into farming and built a spacious home for themselves. The twins who had been leased out as teenagers themselves became slave-owners, buying dozens to work their new plantation.

The twins aged 31, were determined to live a full life as possible and wrote to Robert Hunter, the man who had ‘discovered’ them, ‘We enjoy ourselves pretty well but have not as yet married, but we are making love pretty fast and if we get a couple of nice wives we will be sure to let you know about it.’

In fact they were pursuing the daughters of a neighbouring farmer, David Yates. An unusual romantic conundrum had arisen. Over several years, Chang and the slimmer, more attractive sister, Adelaide, had fallen in love. Eng and her sister, Sarah, had not.

Marrying two sisters made sense, however, as Victorian propriety would not have tolerated a woman sharing such intimacy with any other female. It took the somewhat portly Sarah five years to agree to Eng’s offer of marriage; both couples were married by a Baptist preacher in Yates’s living room in 1843. The foursome then returned to the Bunker home, where the marital bed had been enlarged and strengthened.

Quite how they all envisaged their marriage working is not clear but, according to some reports, the twins had considered drastic measures. Despite being warned by various doctors over the years that an operation to separate them could prove fatal, they had travelled to Philadelphia a few months before their wedding for just that purpose. They were waiting to go into surgery when the sisters, who had learnt of their quest, burst in and persuaded them not to go through with such a risky procedure.

The couples’ bedroom etiquette remains unclear. It was certainly not considered a polite topic at the time, although a local newspaper noted that their wives’ first children were born just six days apart in 1844. A later pair were separated by eight days.  Still, the brothers went on to father 21 children; 11 by Eng and ten by Chang.

Amid reports that the wives who must have shown amazing forbearance over the years finally began to argue, the twins set up separate homes and installed a wife and children in each. They agreed to split each week between the two.

But while the families might seem to have had all the trappings of gentry, with their estates, slaves and silverware, money was sometimes tight especially after the South was ruined in the American Civil War and so the brothers had to go back ‘on tour’ six times in later life

In 1870, as they were returning from a tour of Europe and Russia, Chang suffered a stroke down the side closest to his brother. Eng nursed him as best he could, carrying around Chang’s now useless leg in a sling as his ailing brother leant on a crutch.

In January 1874, when the twins were 62, Chang caught bronchitis but still insisted that they venture out in the cold to honor their twice-weekly house-moving ritual. Two days later, Eng awoke early and called for help. His brother had died.

‘Then I am going!’ cried Eng, and began twisting in panic in bed. Sweating profusely and saying that he was in great pain, he told his wife: ‘I am dying.’ Drawing his brother to him, he uttered his final words: ‘May the Lord have mercy on my soul!’

By the time the doctor arrived, ready to cut the twins apart, Eng was dead, just two-and-a-half hours after his brother passed away.