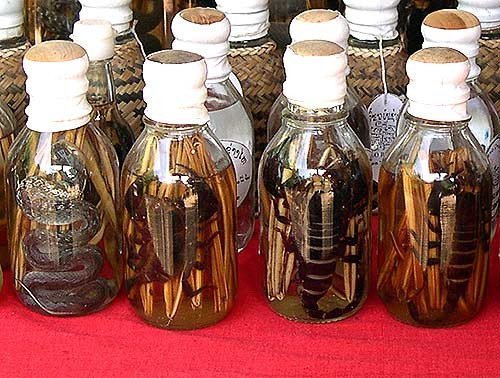 Discover Thailand – Drinks of Isaan – Where Alcohol can improve a man’s vitality or lead to the loss of your mind, fingers and toes

Discover Thailand – Drinks of Isaan.  If you have been fortunate enough to visit the north east or travel Thailand you will not be surprised to know the region has more than 160,000 square kms of land, is nearly half the size of Germany and holds one third of the land mass of Thailand. Further-more Isaan is considered by many to be the cradle of human settlement in Thailand, what is strange is that it is the least visited region for tourism.

One of the pleasant surprises you’ll find once there is the bizarre and wonderful assortment of traditional and new beverages on offer. From the newish and surprisingly refreshing Dr. Pepper Shandy (yep you got it, that would be half DP with half Singha beer) and the popular tipple kaw nam lac a combination of orange juice with chillies and rum.

To the roadside stalls you see everywhere, full of urn-like earthenware jugs brimming with what appears to be toasted sticky rice, but is in fact Lao hai (เหล้าไห) or lao u (เหล้าอุ) a version of SATO which is a traditional Isaan beer style commonly called Thai rice wine.

Sato is brewed using a traditional starter culture known as luk paeng (ลูกแป้ง, a small ball of starch, yeast, and mold) which is used to assist in fermentation. The steamed sticky rice is mixed with luk paeng and kept in a fermentation tank for three days, as the starch in the rice changes to sugar. Water is then added to the fermentation tank and the mixture is allowed to ferment for a further week. Following that, the fresh rice wine is pressed from the dregs, and filtered.

Owing to the simplicity of the process, the resulting beverage is often of variable quality and alcohol content; it also suffers from a short shelf life.

Sato is typically served at both room temperature and served in a large bowl, into which drinkers dip their glasses or cups, while Lao hai is sold with a pair of drinking straws, and labels recommend serving to couples.

The picture shows Lao-Khamu men drinking lao-hai from an earthenware jar. Water is added to the jar to maintain the liquid level as the alcohol is sipped.

Lao Khao or Thai fermented rice whiskey is mainly produced in Isaan and accounts for over two thirds of all alcohol consumed in the Kingdom. It is also known as being the “real” Thai whiskey as opposed to the more commercially popular Sang Som or Hong Thong. At normally 40% proof the legally produced mind blowing Lao Khao is a white spirit made from distilled sahtoh (rice beer). The distillation process like Sato uses sticky rice (khao niew) and small pieces of yeast balls. The result a clear and potent liquor, while not the most pleasent of bouquets and tasting a little like old bread, is very cheap to buy and found almost everywhere.

Here in the vast plains of Isaan and while illegal many people still brew their own version at home, known as lao tho or sa tho.

This brings us onto the traditional medicinal liqueur that is yaa dong. Yaa means medicine and dong means to leave something in liquid until it ferments. Herbs, wood, bark, vines, seeds, plants and even insects, sharks and snakes are thought to have curative properties. These once dried or powdered items are then soaked for up to 30 days, to extract the ‘medicine’ before being mixed with alcohol, usually lao khao. There are thought to be in excess of 200 different herbs used in its various concoctions, with many secret recipes being passed down through the generations. The names that the different mixtures have are colourful to say the least and include such titles as dragons breath, horse kicks the coffin, 11 tigers, sharks tooth and my particular favorite ‘doesn’t know how to fall down’.

Keep your eyes open and you may see Yaa dong ‘bars’ appearing as roadside stalls, with others found at temple fairs (Yaa Dong is the only alcoholic beverage that Thai monks are permitted to drink). You’ll know yaa dong when you see it as it’s normally sold in large glass jars, which can hold up to 2 litres of different coloured hooch, labeled with claims such as a shot will instill energy, strength and male virility. Although common in more northerly regions, this wonderfully intoxicating example of Thai rural culture is slowly dying out, so grab it while you can – it’s one ‘spirit’ that demands respect!

I know the world now seems full of health warnings but this may explain a few things to some people. A word of warning some molds and yeasts can produce mycotoxins, which ingested over a long period may cause ergotism. The symptoms of which can be roughly divided into convulsive symptoms and gangrenous symptoms.

After all that alcoholic grog you’ll be wanting some tasty Thai Mulberry tea to appease your liver. Free Worldwide delivery via our online shop on this link