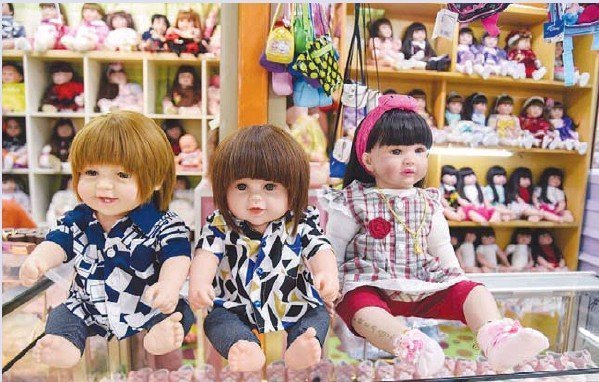 A WOMAN shopping in a Bangkok street carrying and talking with an infant on her arm might not catch much attention. But look again… Instead of carrying a living baby, an increasing number of women these days can be found cuddling a factory-manufactured doll – a Child Angel and they believe it can bring them luck. The life-like ‘Child’s Angels’ doll is a popular charm among Thais. It is believed the doll brings fortune by linking its owner’s birthday with a monk’s spell. The doll costs between Bt1,000 and Bt10,000 and is available at Tawanna Market at Pantip Plaza, Nonthaburi.

They’re called “Child Angels” and they’re the same size as a real infant, and they’ve become increasingly trendy since last year when a number of celebrities were found to have adopted their own baby substitutes.

Det-a-duh Nachariyanukul,is the owner of a well-known Child Angels shop entitled “Ban Look Thep.” He said that Child Angels were factorymanufactured dolls but had been blessed by monks and were being used as some kind of amulet for attracting good fortune.

The main thought behind child angels was that they brought people closer to the temple where the magical doll could be used to make merit.

“Such a doll needs to be treated with goodwill or good deeds, which makes it different from other black magic charms,” he added.

Det-a-duh said the dolls used as child angels were first around some 50 years ago and with no intention for them to be magical charms. But his business took off about six years ago with many customers being middleaged women or lonely people who needed something for company.

The magical dolls were swamped “interested” by social’ media after DJ Bookkoh Thannatchayapan from 94FM posted his picture with a doll, claiming it brought him success in previous events. The trend was taken up by many celebrities and university students.

People could get their magical doll for prices ranging from Bt100 to Bt10,000 depending on the quality of material. Some limited dolls were first brought for Bt10,000 but now attract more than Bt100,000 – like valuable antiques.

Det-a-duh also thanks the media for continuing to spread good or bad news about child angels or questioning about his business.

“The media or other social users who might hate or not favour the idea of a child angel, play a key role in putting this magical doll back among this year’s trends,” he added.

He also mentioned that people should notice there were several shops providing a similar doll with similar ideas of bringing luck, but treated their dolls differently, like having a plate of food served up for them in a restaurant.

“I could speak only on behalf of my shop that the faithful buyer doesn’t need to give their doll food, or take it outside. But if they do, it’s all about their personal thoughts. I have always told my clients that such an item needs only a good merit to keep it powerful,” he explained.

Thai Smile Airways has recently allowed passengers to book a seat for their child angels, and some restaurants charge as much for a doll as for a child.

According to the airline’s statement, it said its charge was for serving its clients’ needs according to an increase in demand. However, the child angels are strictly allowed to be booked for only window seats and not allowed seats in emergency exits in order not to disturb other passengers.

Det-a-duh commented that such promotions were just a way of businesses trying not to lose track of public feelings.