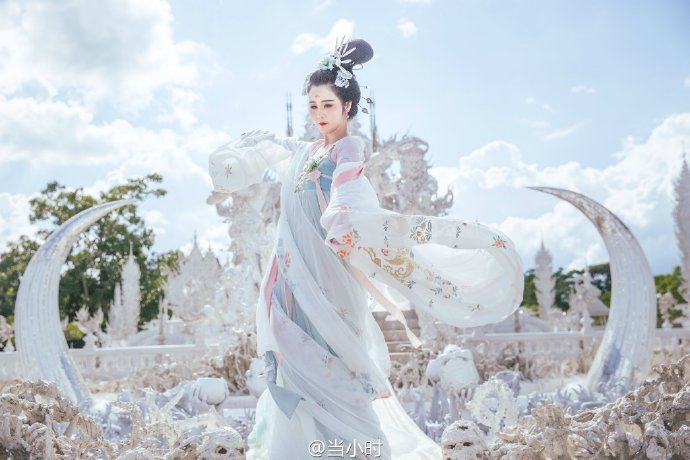 CHIANG RAI – Chalermchai Kositpipat the outspoken artist of the Wat Rong Khun the White Temple in Chiang Rai is upset about a Chinese model posing for photos in front of the temple he designed and built.

Photos of a Chinese model wearing a white traditional Huafu (the traditional dress of the Han Chinese people) to match the beautiful temple, received recognition on both Thai and Chinese social media, however according to Bangkok Coconuts, one photo taken of the Chinese model caused the Chiang Rai artist some concern.

” There is one photo where she looks like a mother of a white snake, that photo is ugly, if I was there I wouldn’t have allowed that shot” There’s a problem, our temple always has a problem Chalermchai said.

Chalermchai was away when the model and her photographer requested to have a photo-shoot at the temple, and he gave permission over the phone after his secretary explained the concept to him. He specifically asked them to not pose provocatively or wear revealing clothing.

Chalermchai said he isn’t trying to be obstructive but only wants the best for Thailand as people from many countries have contacted him to shoot movies and take photos at the White Temple.

Earlier this year the outspoken artist refused the entrance of Chinese tourists for half a day on February 3rd due to their indecent toilet usage after a Chinese woman reportedly placed dirty toilet paper inside the tank of one of its “golden toilets.”

After the reopening, the temple informed the tour guides from China that if their clients behaved indecently,the guide would be responsible for cleaning the toilet