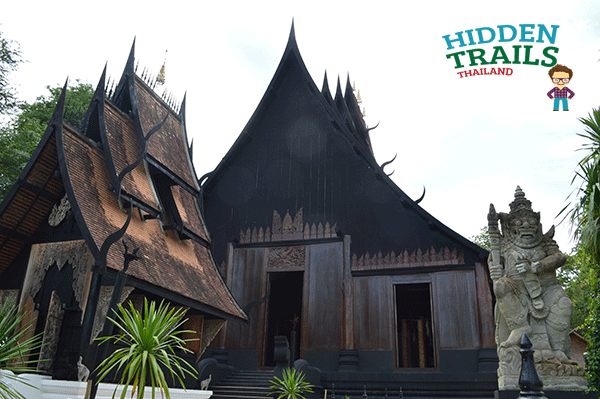 Chiang Rai Museums. While the “white” of Wat Rong Khun is reflected in the “black” ofBaan Daam by national artist Thawan Duchanee, both carry similar messages of Buddhism though inspired by different interpretations and imagery. Baan Daam is another most visited attraction in Chiang Rai and is as imposing as its name suggests. It occupies a vast area of the estate of Khun Thawan Duchanee, who has recently deceased, making his works even more memorable and iconic in this Northern province.

The stone giants guarding the main building seem to look a little like those you would see at Balinese ruins but it does give the impression of a surrealistic feel to the whole place. Khun Thawan Duchanee is a man who believed that he should leave a legacy of his wisdom behind for future generations to ponder upon and reflect. He supported many works of arts. music and poetry in his time.

The wooden panelled doors were carved with images of demons, Buddhist teachings and the struggle between good and bad ie. materialism versus spiritual attainment. His works of art carried an air of mortality and morbidity using items like skulls, horns, hair, skins and antlers to produce his works of art.

As you enter the main hall, you would notice a left and right section which contains several carved totem poles adorned with animal skins. Each pole has a different carving made from a whole tree trunk. one can sit here and reflect on the meaning of these carvings if you can spare the time as I am sure there is a deeper meaning than what is seen with the natural eye.

Below is a huge gold gilded wooden carving of a bird resting on a pedestal with a picture of Khun Thawan Duchanee. One would think this is an appropriate symbolization for such a talented son of Chiang Rai, that portrays freedom, rebirth and wisdom. Could it be the bird signifies a Phoenix to arise from the ashes after death?

While everything is of massive size in the hall, images of Buddha is small in comparison. This is Khun Thawan Duchanee’s way of interpreting the subtlety of Buddha’s teachings which are often overpowered by human desires and greed. To reach Enlightenment, one must discard all forms of wants, needs and attachments which we are faced with everyday.

The unusual dining table which must have looked like it as meant for giants! Carved with wooden horns and adorned with hair, antlers of deer and moose as well as buffaloes, they are very imposing chairs. Most of them even have skulls of animals hanging from the main pole of the chairs.

On the dining table itself is the skin of a huge crocodile, several wooden carvings and most curiously two wooden carvings of phallic design. I suppose these signify human lust and desires as they seemed to have carvings of women on the items.

You can see the full length of another of the dining tables in the hall, also decorated with a preserved crocodile skin. One thing to note is that Baan Daam is as its name suggests, not just black on the outside but also on the inside as lighting is only from the opened wooden windows. So a tip is to go on a bright day if you want to get some really good pictures!

Outside in the garden, there are stone walkways and several more stone carvings of dragons. All around the garden area are many other unusual attractions like meteorite stones, unusual pots and more, so do take your time to walk around. A visit to Baan Daam in Chiang Rai is considered a day trip to Chiang Rai which also includes Wat Rong Khun and the Golden Triangle.

This is a fierce-looking stone guardian at the main house entrance which may be symbolic of the Gods of Death that guard theHeavenly Gates before you are allowed to enter after going through the bridge of rebirth.

There are several outhouses around the main house. These out houses are actually open galleries which contain various collections of art. Khun Thawan Duchanee seemed to have a deep fascination for skulls and horns and he had several of these in his collection!

One of the out house galleries contained a beautiful collection of old rifles on a rack but all hung from animal horns in rows. also inside are more wooden carvings of birds .

A stone sculpture of Buddha‘s hands in a sign of peace is the main masterpiece in another open gallery. Inside are collections of woven baskets for different uses and different forms of weaving in the Lanna tradition.

As I have mentioned before,there are #norules to #justtravel and when you do just that, you will meet some very interesting people. This gentleman is Khun Cherd Sandusit. He sings, read poetry, is an artist and has cut several nice albums. A truly knowledgeable gentleman who sings and sells his CDs at Baan Daam for a living. If you happen to see him there while you are visiting, support his works or buy one of his CDs, they are quite nice and he will sing any song for you while you are there.

These are the great moments in travel when you not just go and see a place but you meet very interesting people who are friendly and willing to share knowledge with you that will widen your world a little more through their eyes!

A view from the inside in contrast to the brightness of the outside in the main hall of Baan Daam. Entrance fees to Baan Daam is free and outside there are a few guides that can provide you with some written materials on the history of Baan Daam

Baan Daam was created in true Northern Lanna architectural design. On its own, it is a beautiful house and the design is something to be appreciated. The doorway is adorned with intricatewooden carvings before you step over the threshold. Please note that when you enter it is only polite not to step on the threshold but to cross over it!

A good view on the four tiers of the roof and how they are designed to stack one on top of the other. This is a very traditional Lanna design not often seen now.

More displays of ceramic items in the open galleries around the compound. Some of these items are fairly old. Notice the item in the middle that looks like a little wooden animal? That is actually an old-fashioned coconut shaver! Those days to get coconut meat shavings, you would sit on that little stool and shave the meat of the coconut shell with the little serrated metal end. Fascinating isit not compared to machine shavers nowadays?

So when you are in Chiang Rai, make sure you do not miss visiting this most unusual house called Baan Daam. Outside of the house compound there is a little souvenir shop that sells some artists works, t-shirts and items of interest including some unusual art pieces. Take your time to walk around and be fascinated by the amazing works of art from a very controversial artist!