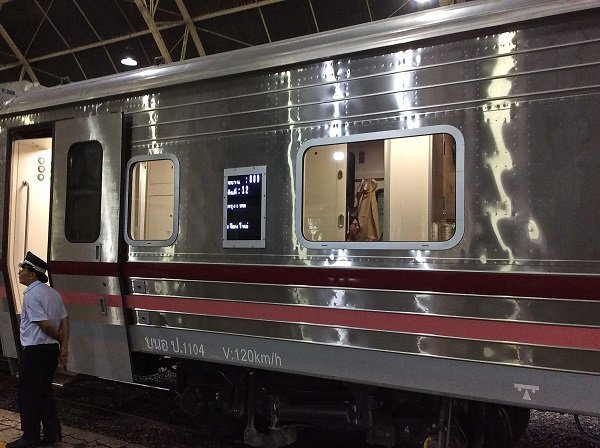 Notice: Trying to access array offset on value of type bool in /home/u726634565/domains/thailanddiscovery.info/public_html/wp-includes/media.php on line 1621

Chiang Mai Thailand Night Train. When you talk about trains and train rides, you would think of the long chug-chug journey in a crowded tram car with uncomfortable seats and toilets that you would rather hold than to go too, not to mention the stuffiness of the train compartments and loud noise of the train. Well, at least that is what most people think when they talk about trains in Thailand BUT check out this new night train from Bangkok to Chiang Mai!

The Chiang Mai night express train is a first class sleeper train that leaves Hua Lampong train station in Bangkok to the city of Chiang Mai in the north of Thailand.These new trains are state-of-the-art electric trains that have been recently commissioned a year ago into service that traverse four routes from Bangkok to Chiang Mai, Nong Kai, Hatyai and Ubon Ratchathani. Traveling by train is an alternative to flying or driving up to Chiang Mai for many travelers, local and foreign alike.

Chiang Mai Thailand Night Train. Most passengers arrive early at the Hua Lampong train station while waiting for the train and aside from just sitting and waiting for the train, why not visit the new Bangkok Train Museum which is located at the back entrance to the train station. This quaint two-story museum holds a treasure trove of train memorabilia dating back to the time when trains were first introduced into Thailand.

Chiang Mai Thailand Night Train. In the museum are replica models of the old trains that were in service as well as items used by the railway staff such as quartermaster caps, old ticketing machines and token issue machines. Browse through these fascinating exhibits and learn more about the Thai Railway companyand how it was started.

Chiang Mai Thailand Night Train. These shiny new trains that run the night express routes from the north, south and east Thailand to Bangkok city is an alternative for those who do not like to fly, or want to sit in a cramped bus or van for long distances yet want to save on a hotel room when they travel inter-province.

Chiang Mai Thailand Night Train. The trains are now easy to spot, as electronic boards on the sides of the carriages clearly indicate the route of the train and carriage numbers while it is still on the platforms. Passengers who require wheelchairs would be most happy to know that these trains are equipped with the handicapped in mind from the wheelchair lifting platform on the carriages to extra large toilets that have enough space for a wheelchair. This is a great plus for the railway service in Thailand which means that it is just as comfortable for those who are handicapped to be able to travel independently.

Chiang Mai Thailand Night Train. Check-out this video below that shows how the wheelchair platform operates inboard the new sleeper trains. Train officers are on hand to assist passengers with wheelchairs to use the special platforms to board the train. Wheelchairs can be stored nearby with cable straps to secure the wheelchair on the train when not in use.

Seating on the trains are now extra wide for each passenger with lots of leg room to stretch your legs out. Each passenger has one super large seat to themselves which later converts to a bunk bed. The second class coaches have bunk beds on the top and bottom, much like a dormitory styled accommodation. The beds are turned down with comfortable pillow and blanket for each passenger by the butler for each coach at around 08.30 pm.

Each bunk bed has a convenient phone charger socket next to it as well as a bottle of water in case one gets thirsty in the night. Additional overhead storage is available next to each bunk on the roof in a metal rack and curtains are provided to keep the alley lights out of your eyes while you sleep. Each bunk is the size of a single bed, with enough stretch space even for a 6 foot tall person. All coaches are fully air-conditioned and the walkways between seats are spacious and clean.

Chiang Mai Thailand Night Train. Check this video out where a demonstration is shown for the turning down of the bunk beds by the coach butlers. These railway personnel also patrol the walk ways at night for better security on board the trains.

Each coach is  connected together with seamless swivel floors and one no longer has to navigate between coaches with exposed exteriors and risk falling off the train. All doors on board the connecting coaches and to the platforms are now automated much like push button automatic pressure doors.

The toilets are compact and there are enough toilets for every two coaches.  The new stainless steel toilets incorporate the same toilets as in jetliner planes with power flush systems and even though it is compact, there is still enough room to maneuver inside. The toilets for the handicapped are much larger with enough space for a wheelchair to park along the walkway.

Washbasin are located outside the toilets facing them. Again they are made of durable stainless steel with automatic dispensers for soap and paper towels. This arrangement makes sense so that toilets can be kept free from prolonged use and one need not occupy the toilets if just want to use the wash basins.

The train ticketing officer goes round to check the tickets for each passenger about an hour after departure from the platform en-route to Chiang Mai. So make sure you have your tickets ready for inspection when the ticket officer comes along.

Tickets for the sleeper trains are still much in demand and must be purchased in advance at least a month before your trip. You can booktrain tickets online through a travel agent or book it yourself online. If you book your ticket online, you will have to collect the tickets in person at the Hua Lampong train station at least an hour before departure or follow the instructions from the place where you have booked the online tickets from. Price of tickets vary from agent to agent or even if you buy direct from the train station but know that these sleeper cars are almost always fully booked especially the first class sleeper cars and availability is mostly on the second class sleeper cars.  The price of tickets start from THB791 to THB1,300 per person per ticket. You can buy these tickets online via this link here on this recommended link : Train tickets to Chiang Mai

Chiang Mai Thailand Night Train. Mid-way between the engine head and tail section of the train is the buffet car. Spanning two coaches, the buffet car offers food and drinks as well as a common area for passengers to socialize and have a meal. A counter at one end of the buffet car offers instant food-to-go which is easily microwaved to heat before eating and any hot or cold non-alcoholic beverages. There are also snacks for those with the munchies. If you did not bring your own packed food then this is an alternative to a meal, however in my personal opinion, it is much better for you to pack some good sandwiches or fast food to bring along with you as well as some snacks. Alcoholic beverages are also not encouraged on board but if you do bring your own, you can consume it in the confines of your bunk area. The sleeper trains are also a strictly non-smoking train so those with a tendency to smoke will have to refrain from smoking for the duration of the ride.

Chiang Mai Thailand Night Train. There is a slightly longer stop along the way just a little before Chiang Mai at a station called “Khuntan” which you will arrive at around 05.30am in the morning. This station is just before the long tunnel on the way to the Chiang Mai railway station. Khun Tan is well known for the Khun Tan Tunnel which is dug deep into the Khun Tan mountain range measuring 1362.10 meters long and the Khun Tan train station is the highest elevated train station in Thailand at elevation of 758 meters above sea level. The Khun Tan range was a natural barrier to central Thailand from Chiang Mai and the tunnel was constructed in 1907 and took 11 years to build.

Chiang Mai Thailand Night Train. If you have a chance to stop and look at this train station, you can still see the old train track levers and switches in use as well as a small memorabilia display and a shrine to the late King Bhumibol Adulyadej. The station is mostly deserted at night but there is a short train ride from Chiang Mai to Khun Tan station for those who are interested to visit the Khun Tan National Park which is just across the road from the train station. These train rides are available during the day for those interested to visit this little town as well as the Lampangand Lamphun provinces.

Chiang Mai Thailand Night Train. At the entrance you can easily avail yourself to the many taxis and “songteaw” which are small pickup trucks converted for passenger use to take you to your hotel or rent a car or even to wait for your designated driver if you have booked one. You can also book transfer and tour services to Chiang Mai with hotel accommodations and recommended tours at Hidden Trails Thailand

Chiang Mai Thailand Night Train. There are many places to visit in Chiang Mai which is also known as the “Rose of the North” from beautiful temples, fascinating Royal Projects, fantastic National Parks, cold mountain sanctuaries, fascinating handicrafts to delectable northern cuisine. So do go and explore Chiang Mai while you are in Thailand!

Chiang Mai Thailand Night Train. This is also a short video by the former Minister of Sports and Tourism Thailand, H.E. Khun Kobkarn during her train ride to Chiang Mai from Bangkok and what many tourists say about  the sleeper train to Chiang Mai.