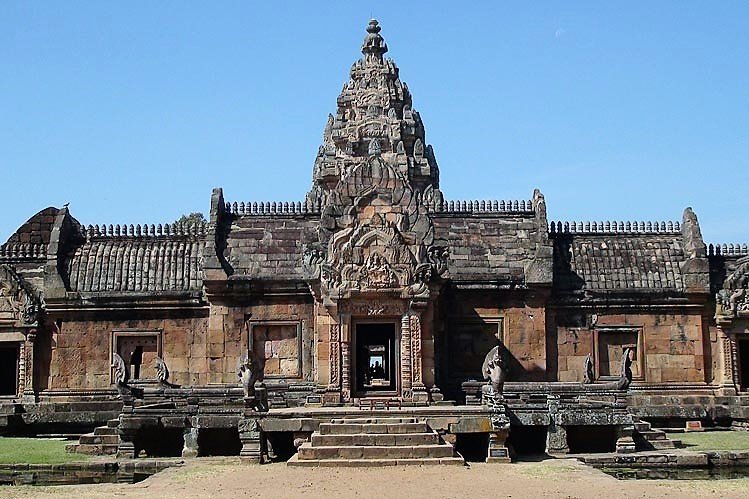 Credit: The Tourist Authority of Thailand

Buriram Thailand Phanom Rung. As Thailand celebrates the ‘2015 Discover Thainess’ year and highlights 12 hidden gems, or provinces that are renowned for their unique history, culture and lifestyle, I am pleased to have been to a few of them, including Buriram where I had the chance to experience the magical moment when the sun shined through the doorway of 11th Century Prasat Hin Phanom Rung temple.

It was unseasonably cold, even chilly at the top of the volcano. A crowd of people had gathered, but in the pitch darkness you heard, rather than saw them. Even so, their chatter was subdued, almost nervous. Hardly surprising – we’d travelled a long way and had stayed awake all night for this once-in-a-lifetime event.

For 40 minutes, we stood patiently but as the eastern skies slowly took on the orange-pink hue of dawn, a voice cried out “It’s starting”. At once there was a silent scramble to find the best position. I unashamedly used my western bulk to ensure I had a good view, then like everyone else, I waited.

We were all facing the elaborately carved portico of an ancient temple; its details masked by the darkness.  Beyond the door, down a long corridor a red glow was emerging – the sun was rising.

The crowd collectively held its breath. Slowly, the rosy fingers of the sun reached down the corridor and everyone gasped, the whole doorway was suddenly filled with a golden light and in homage, the morning birds broke into song.

For a minute, the mountaintop was under a magical enchantment. Most eerily of all, no selfies were taken. Everyone wanted to enjoy this event for themselves, forever.  And they probably will.

The appearance of the sun through the 15 porticos of Buriram’s 11th Century Prasat Hin Phanom Rung temple, on the 15th day of the fifth lunar month is no freak event. The ancient Khmer architects incorporated their knowledge of the heavens when they built this stunning sanctuary atop an extinct volcano. And, if it’s not cloudy, on 3-5 April this year, you can see it for yourselves.

Prasat Hin Phanom Rung is actually worth seeing at any time of year. The temple, built in the 10th to 13th centuries, is one of the best preserved in the world.

The focal point is the main prang representing Mount Kailisaa. But my favourite element is the reclining Shiva lintel above the eastern entrance. Visitors are lucky to be able to see it – it was stolen and went missing for nearly two decades before being returned in 1988.

For a feeling of ceremony and grandeur, approach via the 160 metre walkway made of laterite slabs bordered by huge stylised lotus blooms and ends with gigantic steps in five terraces guarded by mighty ancient nagas, that ubiquitous spirit lord of Southeast Asia.

Annually, when the dawn shows through the porticos, there is a spectacular parade down the walkway and an evening show that tells the story of the temple with lights, gorgeous dancers, powerful kings and warriors. Even if you don’t speak Thai, it’s enthralling theatre. How could it not be? The stage alone is 1,000 years old and aligns with the very heavens!