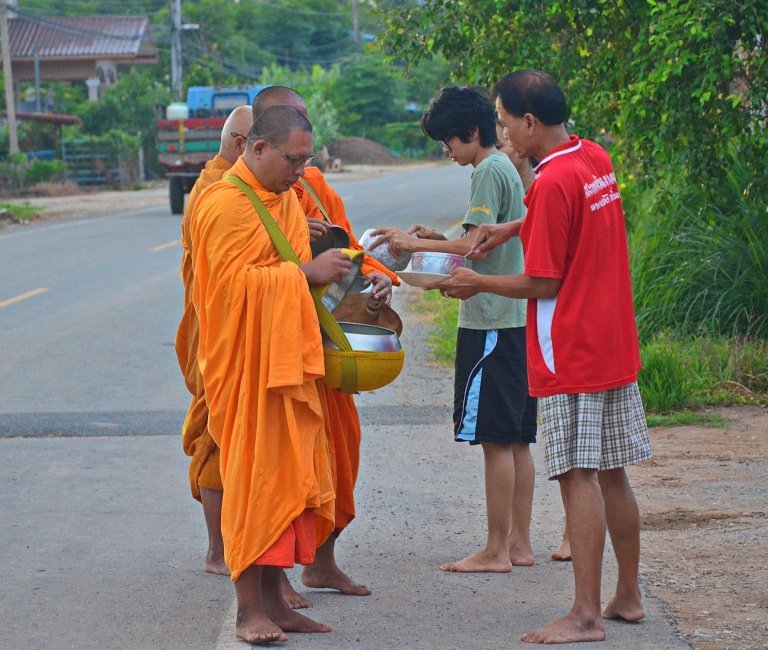 Buddhist Monk. Men in Thailand are often expected to become a monk at least once and April is a popular month to join in celebrating the Thailand New Year. But any month will work. They may spend their entire lives in the monkhood or they may spend just a few days or a month.

Why do they do this? Two basic reasons. First, it is to become a better person. These men study Bhudda teachings and promise strict vows. Secondly, it is a way to make merit. Often, a member of their family has died and it is a way to honor the deceased spirits.

Back in Missoura the 10 Commandments are often talked about. Break a few of these rules and it’s tough to get in Heaven. The novice monks are taught that if they break any of the 5 Precepts, then they should be able to figure out what to do, in order not to do it again. Karma, baby.

Does becoming a monk help guide men? About as good as the 10 Commandants do…

Buddhist Monk. It is only 100F. In the shade. As these young men begin the ordination process, their family is usually beginning a party. They tend to last 2-3 days. And nights.

Buddhist Monk. This 83-year old lady, is mother to many of the ladies seen in this shot. This patriarch will be featured in an upcoming story. She doesn’t party much anymore.

Buddhist Monk. Initially, I was going to delete this shot as I was trying to capture all four ladies together. Didn’t get what I was after. But then I noticed my pet peeve. They are everywhere.

Buddhist Monk. In one of the buildings on the temple grounds.

Buddhist Monk. The road running along side the Nan River is now closed. Tents have been set up, food cooking and dancers for entertainment. And speakers the size of a small Buick.

Buddhist Monk. Meanwhile, back at the temple the celebration begins. Each novice monk along with family, friends and the traveling band will march

around the temple grounds three times.

Buddhist Monk. A family member proudly holding an umbrella over the novice monk’s head as the walk around the temple continues.

Buddhist Monk. A young man is now waiting for the next part of the ceremony as his grandmother sits patiently on the steps.

Around the temple we go.