Bangkok Weather Thailand Throughout the Seasons of the Year

Bangkok Weather. Like most of Thailand, Bangkok has a tropical savanna climate under the Köppen climate classification and is under the influence of the South Asian monsoon system. It experiences three seasons, hot, rainy and cool, although temperatures are fairly hot year-round, ranging from an average low of 22.0 °C (71.6 °F) in December to an average high of 35.4 °C (95.7 °F) in April. The rainy season begins with the arrival of the southwest monsoon around mid-May. September is the wettest month, with an average rainfall of 334.3 millimetres (13.16 in). The rainy season lasts until October, when the dry and cool northeast monsoon takes over until February. The hot season is generally dry, but also sees occasional summer storms. The surface magnitude of Bangkok’s urban heat island has been measured at 2.5 °C (4.5 °F) during the day and 8.0 °C (14 °F) at night. The highest recorded temperature of Bangkok metropolis was 40.0 °C (104.0 °F) in April 1979, and the lowest recorded temperature was 9.9 °C (49.8 °F) in January 1955.

Bangkok is in the Chao Phraya River delta in Thailand’s central plains. The river meanders through the city in a southward direction, emptying into the Gulf of Thailand approximately 25 kilometres (16 mi) south of the city centre. The area is flat and low-lying, with an average elevation of 1.5 metres (4 ft 11 in) above sea level.[3][c] Most of the area was originally swampland, which was gradually drained and irrigated for agriculture via the construction of canals (khlong) which took place throughout the 16th to 19th centuries. The course of the river as it flows through Bangkok has been modified by the construction of several shortcut canals. 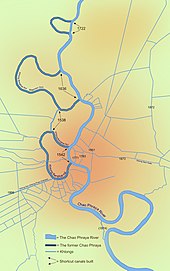 Bangkok’s major canals are shown in this map detailing the original course of the river and its shortcut canals.

This intricate waterway network served as the primary mode of transport up until the late 19th century, when modern roads began to be built. Up until then, most people lived near or on the water, leading the city to be known during the 19th century as the “Venice of the East”. Many of these canals have since been filled in or paved over, but others still criss-cross the city, serving as major drainage channels and transport routes. Most canals are now badly polluted, although the BMA has committed to the treatment and cleaning up of several canals.

The geology of the Bangkok area is characterized by a top layer of soft marine clay known as Bangkok clay, averaging 15 metres (49 ft) in thickness, which overlies an aquifer system consisting of eight known units. This feature has contributed to the effects of subsidence caused by extensive ground water pumping. First recognized in the 1970s, subsidence soon became a critical issue, reaching a rate of 120 millimetres (4.7 in) per year in 1981. Ground water management and mitigation measures have since lessened the severity of the situation, although subsidence is still occurring at a rate of 10 to 30 millimetres (0.39 to 1.18 in) per year, and parts of the city are now 1 metre (3 ft 3 in) below sea level. There are fears that the city may be submerged by 2030. Subsidence has resulted in increased flood risk, as Bangkok is already prone to flooding due to its low elevation and inadequate drainage infrastructure resulting from rapid urbanization. The city now relies on flood barriers and augmenting drainage from canals by pumping and building drain tunnels, but parts of Bangkok and its suburbs are still regularly affected by flooding. Heavy downpours resulting in urban runoff overwhelming drainage systems, and runoff discharge from upstream areas, are major triggering factors. Severe flooding affecting much of the city occurred recently in 1995 and 2011. In the latter, most of Bangkok’s northern, eastern and western districts became inundated, in some places for over two months. Coastal erosion is also an issue in the gulf coastal area, a small length of which lies within Bangkok’s Bang Khun Thian District. Global warming poses further serious risks, and a study by the OECD has estimated that 5.138 million people in Bangkok may be exposed to coastal flooding by 2070, the seventh highest among the world’s port cities.

There are no mountains in Bangkok, the closest mountain range being the Khao Khiao Massif, located about 40 km (25 mi) southeast of the city. Phu Khao Thong, the only hill in the metropolitan area, originated in a very large chedi that King Rama III (1787–1851) decided to build at Wat Saket. The chedi collapsed during construction because the soft soil of Bangkok could not support the weight. Over the next few decades, the abandoned mud-and-brick structure acquired the shape of a natural hill and became overgrown with weeds. The locals called it “phu khao” (ภูเขา), as if it were a natural feature. In the 1940s surrounding concrete walls were added to stop the hill from eroding.