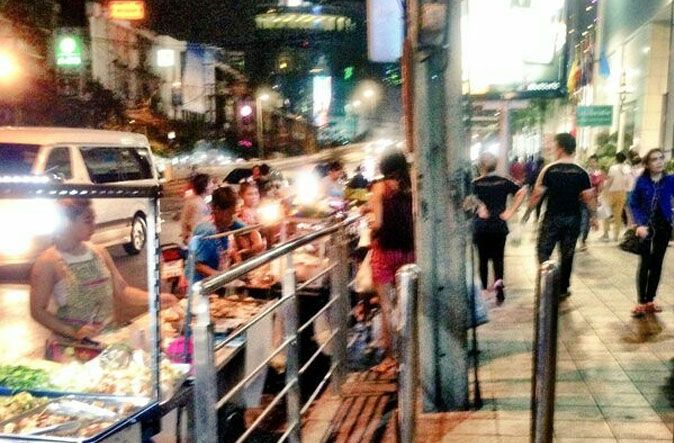 After City Hall evicted hundreds of street vendors in Pratunam area last month, a dozen reportedly gave the authorities the finger by occupying part of the road to set up their shops last night.

Twitter user kt_wt shared snapshots of the vendors outside Palladium shopping mall on Petchaburi Road as they tried their best not to break City Hall’s order.

“They banned vendors on the sidewalk, so they just set up shops on the road. Be careful of hitting them if you drive past the area,” wrote the caption.

The photos have drawn a variety of opinions from Thai social media users.

“Can’t arrest them for trading on sidewalks anymore because now they do it on the street. Police must be stunned,” a popular comment said.

“You can’t just blame the vendors. The buyers are responsible, too. If no one buys, no one sells,” Pokpong wrote.

“Officials should have arranged a new venue for them to set up their stalls and not just told them to go somewhere else. Some people are really poor. If they had options, they wouldn’t be doing this,” Khunnapim wrote.

The move was a part of Bangkok’s ongoing sidewalk organization campaign, which has led to an end for many of the city’s iconic shopping locations such as Pak Khlong Talad, Saphan Lek, and Khlong Thom.

Last week, officials also ordered vendors on Silom road to clear out by the end of the month.