Bangkok Songkran to be cut to 3 days per BMA 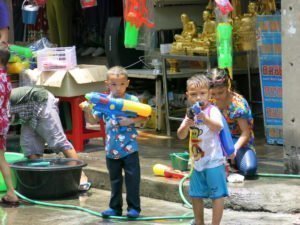 Songkran Bangkok – I’ve got you in my sights Mister

The nation is facing its worst water shortage in twenty years and the Bangkok Metropolitan Authority has announced it will shorten Songkran celebrations from four to three days, as the festival will be held on April 12-14 across the city. Information was supplied by deputy governor Amorn Kijchawengkul.

Amorn encouraged revellers to spend some dry quality time with their family on April 15 instead, as the famous festival marks the start of  the Thai New Year.

Water fights will only be allowed only until 9pm each evening to save water.

While the celebrations usually last until late at night in areas like Khao San and Silom Roads, each district has now been instructed to publicize the new rules to locals and tourists.

Amorn added that Central World had also agreed to cooperate with the city’s policy and will cancel their water filling stations, which means you have to bring your own water from home.

Amorn added the usage of water in Bangkok usually triples during the Songkran festival.

The city expects to save 5 billion liters of water this year by shortening the festival, Daily News reported.