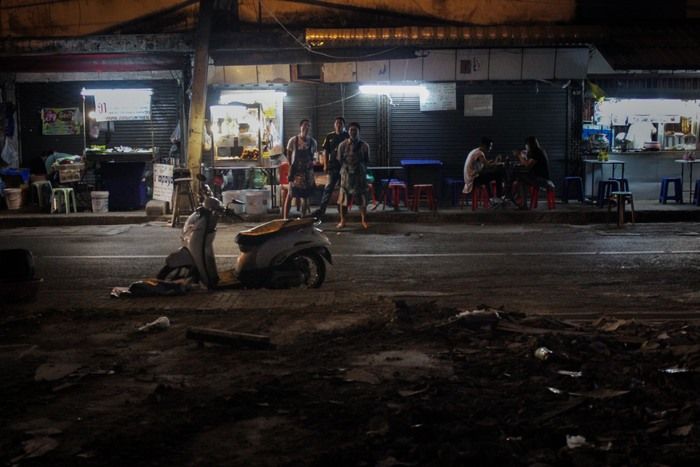 Bangkok Soi 38 food vendors struggle to survive. It has been two months since Bangkok said farewell to the glorious street food scene on Sukhumvit soi 38 after the building that housed the popular food hub was sold off and demolished.

Now, some of the vendors who had nowhere else to go have moved across the street to the parking lot of Sutti Mansion, at the entrance to Soi 38, where they struggle to survive amid fear that their stalls may be shut down at any moment by the authorities.

“The police so far have stopped coming, I think they understand that the economy in Thailand is not going very well,” says Chaichana, 48, a salad vendor who still tries to make a living on soi 38.

Chaichana was among a dozen vendors who sold food on soi 38 every day from 6pm until midnight for more than four decades.

Some of the vendors asked for permission to use other land nearby, while others sought alternative locations elsewhere.

Since the demolition of the building, the parking lot of Sutti Mansion has become one of the most popular places in the area, although there was not enough room for all of the sellers to relocate their stalls.

“We cannot move there, it’s too expensive for us,” said Chaichana, who complained that the number of customers decreased after the notice for the demolition of the building became public, an idea shared by most vendors.

To Chaichana, the people who worked as vendors on the soi were something of a family who shared hard work, long conversations and memories over several years. Even though many of them have moved, they still stay in contact.

“Sometimes Marley [who sold juice on the soi for 32 years] comes to visit us, but she said because of the decreased number of customers, it’s not enough for her to continue her business here,” said Chaichana.

Another familiar face on soi 38, Ei, who ran a porridge shop at the entrance of the street, has had a bit more luck. She has moved her stall to Rama IV Road and thanks to the maps she distributed at her stall before moving, she has regained some of her customers.

However, Pan, who had sold salad on the soi since she was a child, returned to Isaan to try to open a new restaurant.

Joe who works at his family’s stall selling chicken admits the changing face of the soi is affecting customer numbers.

“I have almost half the number of customers as before. The soi used to be crowded with tourists,” said Joe.

Chaichana believes he will have to eventually find a new soi to set up his stall on and make a living.

“I think people have stopped coming because they have read in the media that soi 38 is closed. Anyway, I do not think that we will stay in this part of the street for long. The spaces behind our stalls have owners and will force us to move at some point,” explains Chaichana.

“If they kick us out, we’ll move somewhere else near here,” he says with conviction.

At the entrance to soi 38 hangs a sign that encompasses the spirit of the vendors and their ongoing fight with the authorities, the sign says: “We will survive!”