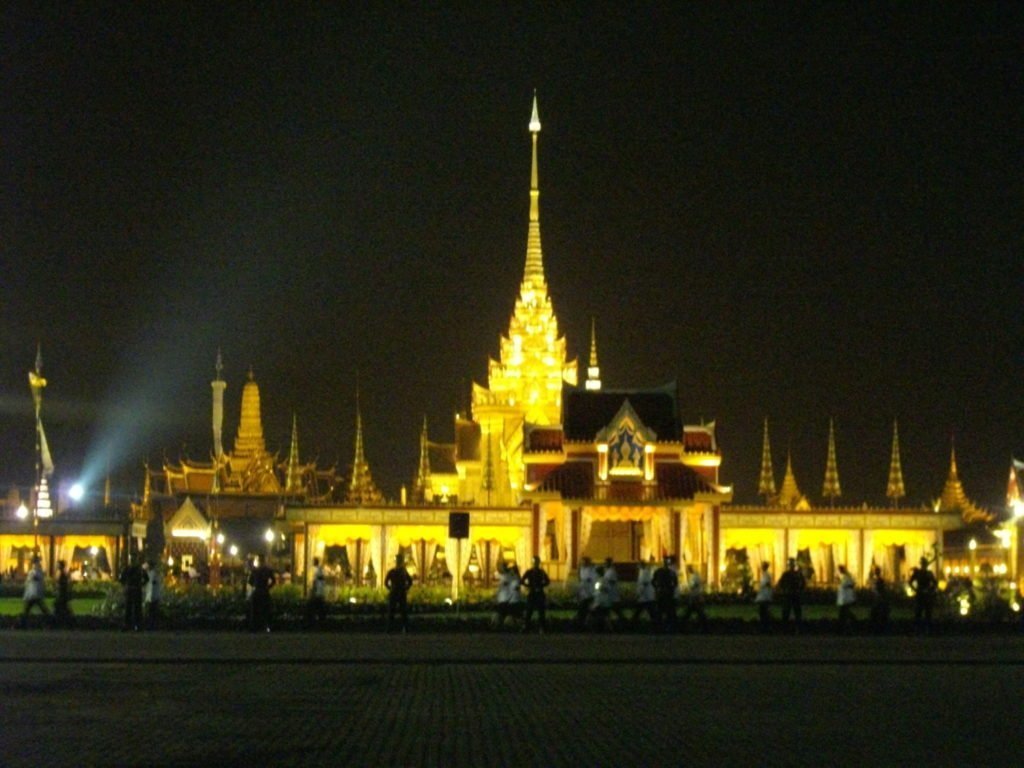 Bangkok Sanam Luang Park Concert. It is quite difficult to defend accusations that Thailand is a cultural backwater; yes, occasionally a world renowned artist will appear here such as Tom Jones or Santana and it does have its own Philharmonic Orchestra, but it certainly cannot come close to the options available in say, New York or London. However, for one night, Bangkok did hold its own.

On Sunday night I got a call. I don’t usually bother to answer as I didn’t recognise the number and I usually then have to spend the next ten minutes in my very best Thai repeatedly telling the caller that Bee or Mai or Daeng or Gob is not here, has never been here and is unlikely to suddenly turn up here for the first time in the next few minutes. But answer it I did and after some initial confusion I remembered I had entered a competition just before Christmas and the caller, from the Nation newspaper, was telling me I had won.

The prize was two tickets to attend a concert at Sanam Luang park in Bangkok by Zubin Mehta and the Israel Philharmonic Orchestra. It was actually the article on him that attracted my attention. It was buried somewhere on the Nation website and I don’t usually dive very deeply into the website, if there are lots of reports on the nonsense activities of the politicians I usually click on another site very quickly rather than be irritated by their activities (or lack of activity). But this day must have been particularly quiet and having read the article, at the bottom of the page they mentioned this competition; answer two simple question to win the tickets. Why not I thought.

Another reason for reading the article was to find out about this concert, but it appeared the concert was invitation only and in any case the tickets were 15,000 baht each, about 300 pounds. So this girl was frantically trying to tell me that the concert was Tuesday night and how could I pick the tickets up beforehand as there would be tight security at the concert and nowhere to pick them up on the day. Also we needed to get a car parking ticket if we were to take our car and we needed to do that in advance too. I called Ploy (my wife) who was in Bangkok and she called this girl back as she knows Bangkok well whereas I didn’t even have a clue where this Sanam Luang Park was.

The next day Ploy had to drive into Bangkok to collect the tickets. Ploy was quite excited by the time she came home, proudly showing off our VIP Car parking ticket. We still had little information about the concert, even its starting time which we had been informally told was 7p.m. (the ticket said nothing) but we planned to leave at 2p.m. to allow plenty of time to get there.

We needed that time. OK, we stopped for a late lunch on the way but without any instructions on where it was, save for Sanam Luang park and I knew the concert was to held over-looking the Grand Palace we just aimed in the general direction. It was 6p.m. by the time we got to the park but it was obvious by then where the concert was. What was not so obvious was where the car park was and it took another 30 minutes before we found the entrance having had to crawl around the perimeter of the park in the heavy evening traffic. We parked our 8 year old Mazda pickup opposite two Bentleys and behind a Mercedes and walked to the entrance. Even though we had made an effort we felt a little under-dressed for the occasion as even the waitresses had dresses on and Ploy began to worry if her trousers were OK. Too late anyway but they did let us in and we found various drink laden trays being trust in our direction, although none with alcohol on them. That was a little disappointing and I thought it might be because the government seem keen on eradicating alcohol with their news laws on restaurants not being allowed to serve alcohol in the afternoons if they front a road (not that the lunch we had, in a restaurant fronting a road, seemed affected by that).

We climbed the steps of the makeshift seating area and found our seat which had a nice view of the stage. By now Ploy was as excited as I have ever seen her. She was almost certain she recognised about 25% of the people there: ‘he writes music, I think, and she is a (Thai) movie star and I know him from somewhere’. During the interval Ploy grabbed one of these unfortunates and I took a photo of them together before he could fight her off- we still don’t know who he is but Ploy did inform me he was gay.

We stood for the anthem, making the whole makeshift structure sway several centimeters. Well, I thought, with all these hobnobs here at least our deaths will get reported. I had this vision of the scaffolding structure being put up by a small family team using their gut feelings on the strength ‘calculations’ whilst high on M-150. But then some excitement. Princess Maha Chakri Sirindhorn was attending and so the next few minutes were spent with people fawning around her while she took her seat and then more minutes while a flock of photographers took her photo. Everyone was still standing at this point so it was difficult to catch a photo but I think I did get one of the back of her head. No other opportunities for photographs arose. During the intermission she stayed in her seat and we couldn’t approach her because of numerous white tunic’d bouncers. At the end of the concert she walked down to the bottom of the stage to talk to Zubin Mehta and it was impossible to see her through the crowd and then she was whisked off while we were made to stay in our seats. She did pass just underneath us showing a faith in the scaffolding I didn’t hold and as she did a solitary voice screamed out – in Thai – Long Live the Princess. That voice belonged to Ploy. How we avoided prison I do not know.

The first part of the concert was Beethoven (OK), Mozart (I will say it – I don’t like Mozart, his twinkly music leaves me cold and so did this) and Rimsky Korsakov (a great bells and whistles piece). The two Thai people next to me fell asleep and did not return after the intermission. Applause was somewhat muted overall with several Thais not applauding at all but we were – Mozart excepted – thoroughly enjoying ourselves and actually this was really all about location, location, location, as the Grand Palace glimmered beyond the stage and the lights of Bangkok shimmered further in the background.

The intermission was just 30 minutes which was shame as it turned out. As we descended the steps I immediately caught sight of various stewardesses with trays of wine and pushed a few old ladies aside to grab a couple of glasses (Ploy doesn’t drink alcohol but we have an agreed ritual that where there is wine we always take two glasses and pretend one is for her). And paraded before us was a buffet of Ritz hotel proportions (and standard). There just wasn’t time to even get around the tables to see what they had and we were still stuffing the food into our mouths as we climbed back up the steps. I had availed myself of a tray of smoked salmon and the wine of course. Ploy went for sushi, beef carpaccio, miso soup and some Thai desserts. It was touch and go if we were to return for the second half of the concert at all. It was all free.

We are glad we did return. Brahms it was, wonderfully played and the highlight of night, two shorts encores – I recognised the Tik Tak Polka but could not put a name to second piece.

The highlight for me was Ploy’s excitement and she loved the music too. It will be difficult for anything else this year to top that evening especially as Ploy has asked for the next competition I should win seats at to include a dinner for the two of us and the King and Princess as she would like to meet them.