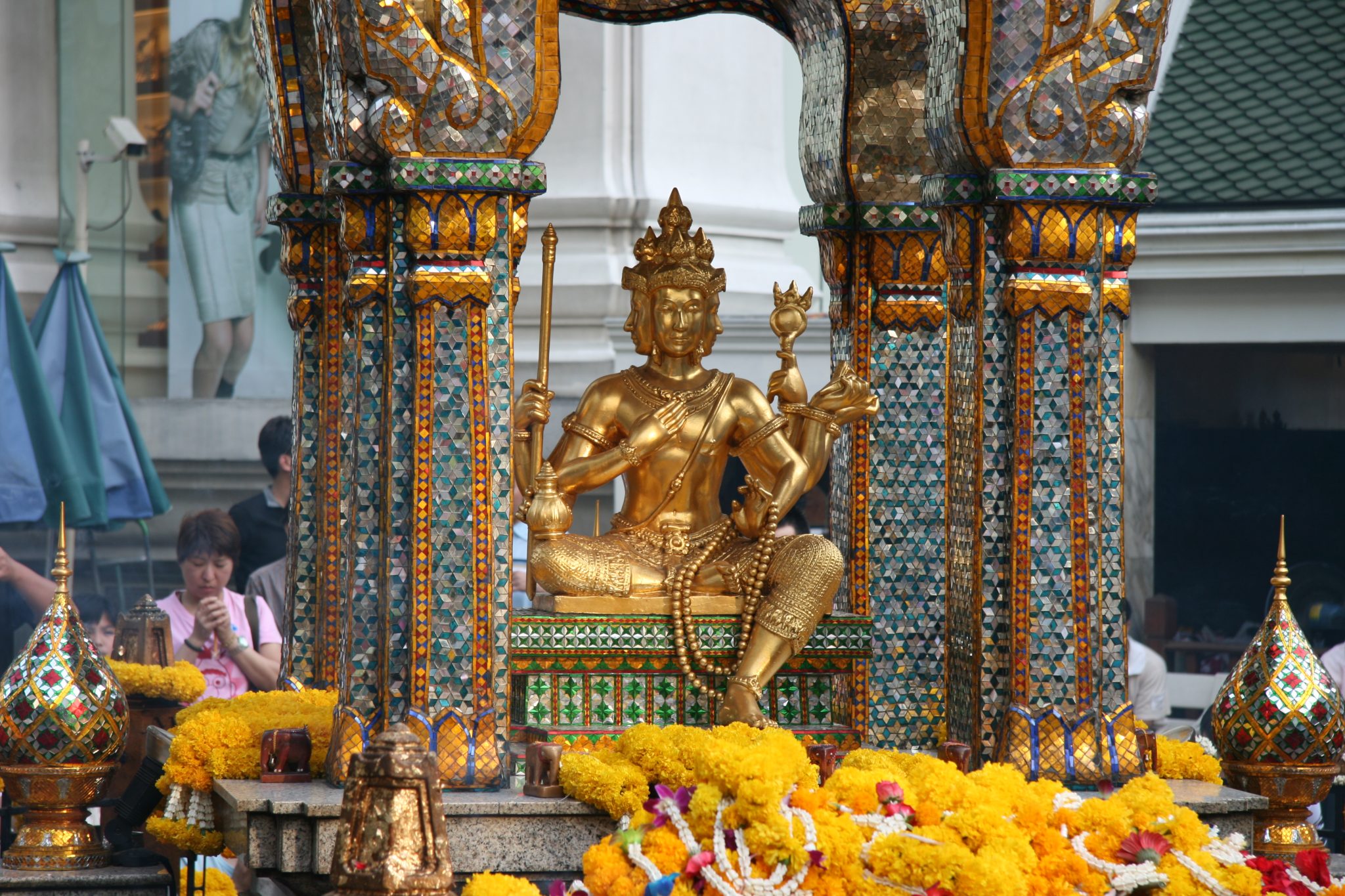 Bangkok Ratchaprasong. Modern moralists like to tell us that we’ve lost our way: that we value objects over actual values; we seek solace in shopping rather than spirituality and consumerism that comes before compassion for others. Are they right? When you hear of people queuing for days to get their hands on the next “must-have” phone, or spending unspeakable sums on brand-name handbags, you do ask yourself if we wouldn’t be happier looking for fulfilment beyond the malls and markets.

But shoppers in Bangkok don’t have to wrestle with guilt when they’re buying Gucci, or neglect their religious duty when shopping for duty-free. It’s the city of angels after all, and here you can be spiritual while spending.

This is because Ratchaprasong, Bangkok’s best-known shopping area, which boasts the coolest malls and biggest brands, fabulous boutiques and famous faces, is also home to some of the city’s most revered shrines – places where the devout pray, the luckless make offerings and the thankful come to show gratitude. In the shadows of modern malls, you’ll still catch the smell of incense and jasmine and see people observing the most ancient of traditions.

Ratchaprasong is home to six major shrines to Hindu deities. For tourists, they offer a fascinating glimpse of how Thailand blends the ancient and modern, incorporates a sense of fun and creates something uniquely Thai. They’re worth seeing and to visit them all in one day is considered a way of inviting luck into your life. This shows how quickly a tradition can emerge, as all of the statues were made in modern times.

There’s no established route to take in all the shrines. The order in which you see them depends on from which direction you approach, or maybe what’s on your shopping list. As of yet, there’s no pilgrimage route such as you may find in Rome, Mecca or Jerusalem – but give it time.

This is the most famous, and certainly the most respected of the Ratchaprasong Shrines and all Bangkokians know the story behind its creation. In 1958, after several mishaps in the construction of the Erawan hotel, a four-faced Brahma image, Phra Phrom was installed to appease angry spirits. Needless to say, the problems stopped.

An important deity in the Hindu pantheon, Brahma oversees Heaven and Earth. Devotees visit the Shrine seeking answers to their prayers, and there are many in the city who attribute a change of luck to their having paid respects at this shrine. Throughout the day there are displays of Thai dancing and you can buy incense sticks and flowers to make offerings of your own. To do this, circle the Shrine clockwise to respect each face of the god and give 12 incense sticks, four candles and four jasmine garlands.

Indra, in front of the chic Amarin Plaza, is popular with office workers who bow their heads as they pass each morning. Enshrined in 2006, the jade-coloured statue represents the king of the gods, and he sits resplendent with his lightning bolt. Offerings of jasmine and model elephants are offered in return for Indra’s divine protection.

Located in front of the InterContinental Bangkok Hotel, this distinctive sculpture represents Narayana, a twin incarnation of Vishnu and the god of mercy.  Narayana’s statue was put here in 1997 to protect local businesses and shoppers and he sits atop his celestial transportation, the Garuda. This bird-like creature also adorns local businesses and is a symbol of the monarchy in Thailand where it’s known as Khrut. People make offerings of flowers and textiles and sweet Thai desserts to the statue.

Consort of Narayana and mother of the universe, the beautiful goddess Lakshami represents wealth and fertility and her statue here in Bangkok is visited by people wanting children and fortune. Devotees bring offerings of lotus flowers, coins and sugar cane. The statue is located on the 4th floor of Gaysorn Plaza, which opens daily from 10.00-20.00 hrs.

Enjoying pride of place in front of the CentralWorld shopping complex, the much-loved elephant-headed god Ganesh is visited in the early hours of the morning by revellers and devotees who bring huge amounts of fruit, garlands, sesame cakes and milk. He is popular with creative people seeking inspiration and those seeking protection.

Being made up of Brahama, Vishnu and Siva combined, Trumurti represents union and so is the god of love for the Thai people. You often see Bangkok’s young and lovelorn here making offerings, especially on Thursday and Tuesday evenings when it’s believed the god comes down to listen to prayers. People present red roses and red candles. The Trimurti Shrine is also located in front of the CentralWorld complex.

Though not ancient monuments, the shrines of the area are revered by many local people so when visiting, show the same respect as you would at any other temple. Avoid wearing shorts and vests and don’t point your feet at images at any time.