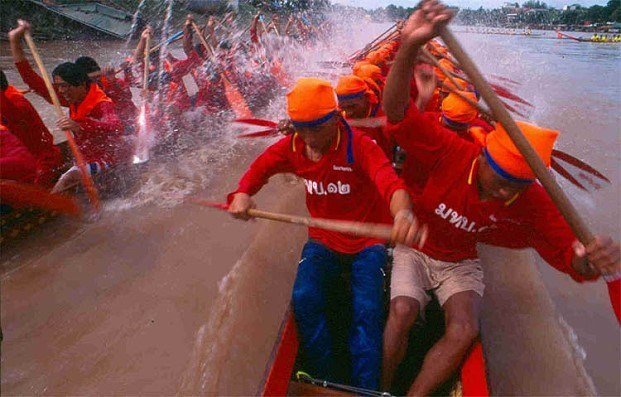 When: Normally 2nd or 3rd Weekend in December (TBC)

Bangkok International Swan Long Boat Races. This annual event, showcases these very long and narrow human-powered boats, similar to dragon boat racing (originally from China, now played out in over 50 countries or territories around the world.). Swan boat racing is mainly practiced in Thailand, like their older counterparts, Swan boats are round-bottomed boats, which come in several lengths that hold 20, 40, and 60 paddlers in a side-by-side configuration.  All boats are designed with a figurehead placed at the prow in the shape of a swan. The swan in Thailand (หงส์ H̄ngs̄̒) is associated with the religious teachings of Buddha and is known in Thailand as Thep Kinnaree, one of the loveliest of the Himmapan beings. With the head and torso of a beautiful Woman, while tapered below the waist she has the body, tail and legs of a Swan

A Brief History of Long Boat Races in Thailand

There are a good number of Long boat Races and Festivals across Thailand, with the majority staged during the Thai Buddhist Lent Period and around Wan Ok Phansa, normally September or  October each year, (16th October 2106), it is also the time of the year when the rivers are also at their highest.

Long Boat-Racing is one of Thailand’s oldest traditions and events have been arranged continuously since the Ayutthaya time (approx. 600 years ago). They were used to enhance the physical and mental strength of the men folk, as the country was almost continuously at war, with its neighbours in Burma Lao and Cambodia.

The 2016 event is once more organized by Tourism Authority of Thailand (TAT) together with the Bangkok Metropolitan City, and the Rowing and Canoeing Association of Thailand and includes

The fast and furious races cover three classes, carrying total prize money of over two million baht: The largest long boats have 55 oarsmen and will be challenging for the King’s Cup Royal Award; with smaller 30 oarsmen craft dueling for the Queen’s Cup Royal Award.

Finally there are the international races, with 16 teams from 10 countries contesting the Prime Minister’s Award. All the races will be fought on the Chao Phraya River facing Suan Luang Rama VIII Park, over a 500 meter long course. The best place to catch all the action is Rama VIII Park under the Rama VIII Bridge. The event is scheduled to take place from 9am to 5pm on both Saturday and Sunday. The final races will be broadcast live on Thairath TV on Sunday from 3pm to 5pm.

Long Boat Racing around the globe

While Long Boat Racing is believed to have originated in Southern China over 2000 years ago, various parts of Asia also have long traditions of paddling boats that are similar to the Chinese dragon boats. In Korea, dragon boating has been an integral part of the Korean culture for more than a thousand years. In Vietnam, Ba Trao rowing originated from an ancient ritual of worshipping the whale god (Ong), the river god and the earth god, combined with prayers for peace, happiness and full harvest. In Okinawa, Japan, the Naha Hari (also spelled Haari, Haarii or Hare sometimes) has been a tradition for fishermen to pray for fair weather and good fishing since the 14th Century. In Kerala of southern India, annual snake boat races are held during the Onam Festival to reenact various Indian legends that involve using a fleet of snake boats to carry elaborate offering to the Sree Krishna Temple. A giant snake boat can carry as many as 100 paddlers.

What this festival and the others, that are held across the kingdom all have in common, is a great atmosphere, punctured by the tumultuous noise and vibrant colours, that take hold of your senses and leaves you wanting more. Combine this with the assault on your taste buds and nostrils, from the vast army of people selling delicious food and drink, you can tell why spectators enjoy these events so much.