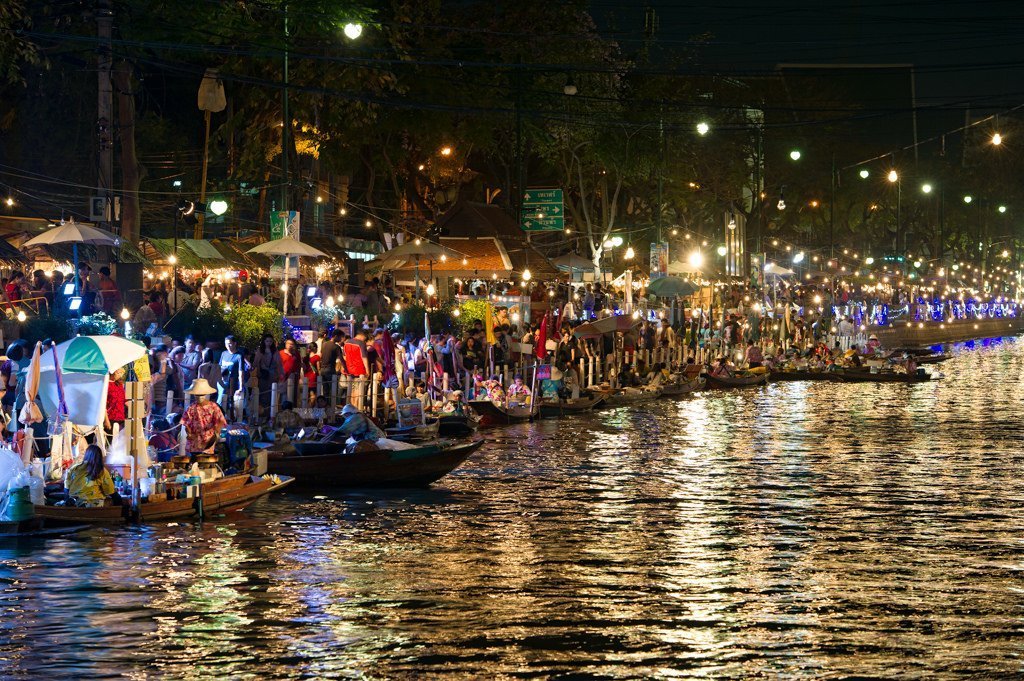 Bangkok Floating Market. Bangkok will be associated with its famous floating markets as the Statue of Liberty is to New York, Mardi Gras to New Orleans and the Alps to Switzerland. In travel agencies the world over, you’ll find fading posters picturing boats filled with hat wearing ladies selling exotic fruits and vibrant vegetables.

In reality, it’s been decades since such markets were an everyday Bangkok experience.  These days, most Bangkok residents do their shopping in supermarkets like the rest of us. There are still floating markets beyond Bangkok; such as, the famous one at Damoen Saduak, but the capital’s canals are now more about transport than trade.

So there’s great nostalgia for the days when Bangkok was the ‘Venice of the East’, which is why the temporary floating market on the city’s Khlong Phadung Krung Kasem is so popular.  Until the first of March, this waterway will play host to 60 boats with vendors selling a taste of riverside life that’s all too rare in modern Bangkok, where buses are more common than boats.

Khlong Phadung Krung Kasem is an ideal place for the market. The canal is not only one of the city’s oldest, being dug in 1851 to mark the border of Rattanakosin Island, but is a working waterway still used by commuters to traverse the city. The passing boatloads of workers and tourists look delighted as they enter the stretch of market – perhaps feeling they’ve floated back in time.

The canal’s banks are high, so visitors to the market have to descend onto a floating pontoon to enjoy the offerings of the waterborne vendors. It can be a little nerve racking as you bob up and down in the wake of passing vessels. But once there, you’re among boats occupied by ladies sporting traditional wide-brimmed hats and even wider smiles. Many sell foods associated with traditional markets and kuai tiao ruea (boat noodles) are the biggest seller. These tasty noodles used to be sold on waterways all over the city but now, the snack is now sadly terrestrial, and served from landlocked boats. Here they’re gobbled down on the water, alongside other traditional treats.

There are stalls lining the canal banks selling handicrafts and clothing, but it’s the food stalls that most people are here for. People pack their bags with Nam Prik (spicy dip) and fruits. There are many treats from Thai childhood here; such as, the Nam Sa soda fountain, where drinks are served through the fuselage of a model jet plane – a retro set up rarely seen these days.

While the locals revel in the nostalgia, visitors can enjoy new sights and sensations and shop. On the northern bank is an orchid market selling lovely blooms at great prices But the action is on the southern bank where you can see displays of Muay Thale (sea boxing) matches in which young fighters box while facing each other on a pole, as well as traditional dancing and cultural performances.

The best time to visit this floating market is in the evening, when the lights reflect off the water and the band plays classic Thai tunes from the stage (best enjoyed from the northern bank). As you sit out by the water, eating freshly- cooked Hoi Thot and Phat Thai, bats flit above the canal chasing insects.

Just for a minute you feel instantly connected to Bangkok’s residents of over the centuries who made their homes on the nation’s waterways. It’s a true taste of Thailand.