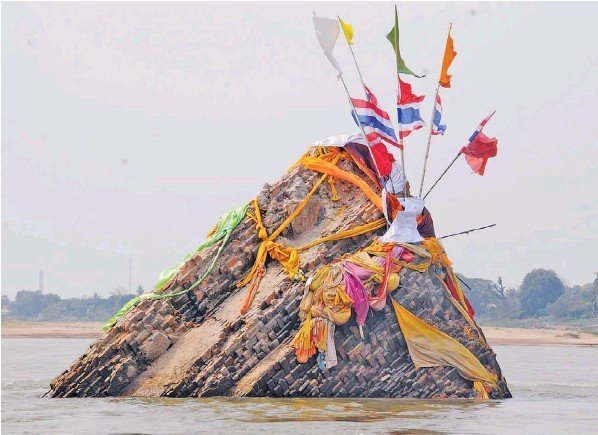 THE METROPOLITAN Waterworks Authority (MWA) will test lower-watervolume distribution for 24 consecutive hours in some areas this week as it braces for an imminent drought crisis. The top of a submerged pagoda reveals itself near the riverside border province of Nong Khai as water level in the Mekong River drops unusually low.

The test will run from 9pm Thursday till 9pm Friday.

“We need to make preparations for any emergency and any water crisis during the 2016 dry season,” the MWA said.

The announcement explained that its waterworks facility in eastern Bangkok might have to cut its production volume in the face of declines in available water.

Affected areas during the upcoming test include communities along two parts of Nonthaburi Road: one stretching from Bang Toranee Canal to Rattanathibet Road, and the other from Rattanathibet to Fai Jia Meng Mill.

During a recent seminar, prominent water expert Assoc Prof Dr Seree Supharatid said the drought crisis would definitely hit the country. He noted that the volume of water flowing into dams was smallest in 2015-16.

“So, over the next four to five months, everyone needs to save water to help the country wade through this crisis,” he said.

Seree predicted that significant rain would not come to the country till late July or perhaps early August.

MWA governor Thanasak Watanathana is now calling on people to save tap water. To encourage people to lower tap water consumption, MWA has offered to give a discount of Bt100 to Bt200 on charges for users who can reduce water consumption by at least 10 per cent during March to April.

The Provincial Waterworks Authority (PWA) has also disclosed that 10 of its branches were now facing a high risk of a water shortage.

The PWA is closely monitoring 51 other branches too, due to concerns that they too may be hit by drought.

The threat has already become real in several provinces. In Ratchaburi, tap water production has faltered because of the lack of “raw water”.

In Tak, Tambon Walay Administrative Organisation’s chief executive Lt Chalerm Boonpornwong said the ongoing drought crisis in his province was the worst ever.

“I’d never found water shortage go this serious before. I am now seeking help from the provincial governor,” he said.

In Pathum Thani, the water level in Rahaeng Canal dropped so low yesterday the ancient floating market on the canal looked more like a land-based market.

In Phichit, farmers lamented that lotuses in their farms had withered due to water shortage. “We can’t earn any money,” Boonchuay Sa-nguannam, a local farmer said.

Senior agricultural officials have conceded that the low level of water supplies for the dry season at this point is not good.

“The situation is not quite good. Now we have far less water in our stock than last year,” Thongplew Kongjun, director of the Water Management and Hydrology Office at the Royal Irrigation Department (RID), said at the ministry’s press briefing.

In the Chao Phraya basin, water stored in the four major reservoirs, including the Bhumibol and Sirikit dams, would only be about 1,500 million cubic metres at the end of the dry season in April.

The RID is now only able to discharge about 18 million cubic metres a day. But the officials said this would last till August, if the plan was strictly adhered to.