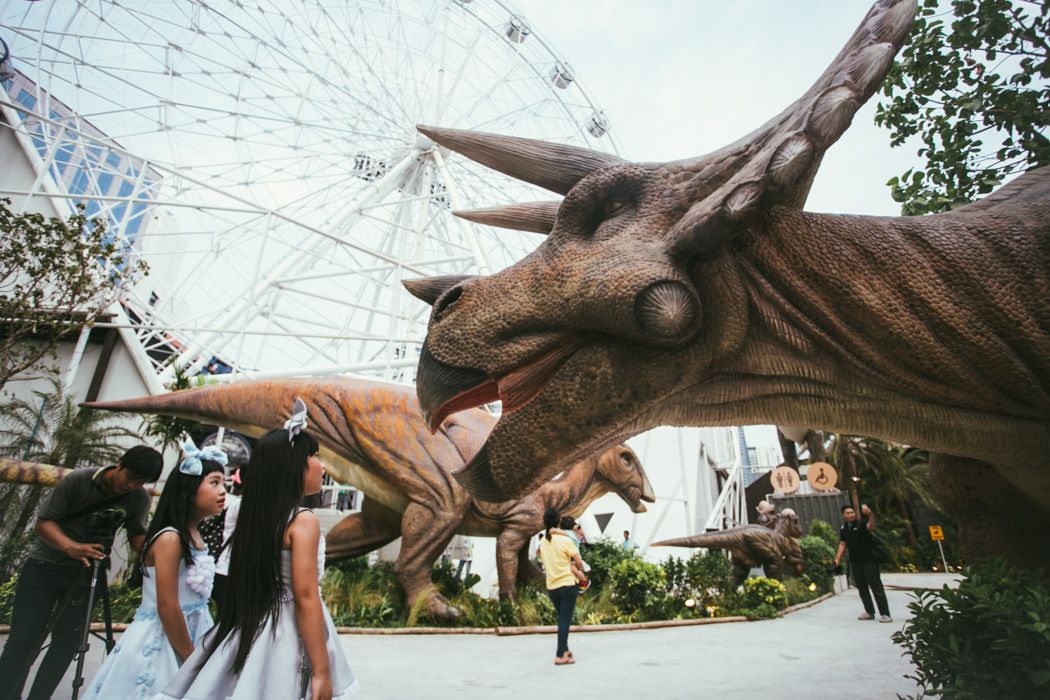 The Dinosaur Planet officially opened doors on Friday for curious Bangkokians to explore the prehistoric world and scare themselves by running away from a bunch of raptors.

After driving the T-Rex around town so it could roar at motorists, a smart PR stunt that got us all excited, The Dinosaur Planet paraded their life-like dinosaurs at their grand opening — and we must say they’re pretty awesome.

Among the activities, the biggest highlights include the Raptor X-Treme, where visitors are put on a mission where they have to escape from velociraptor robots, and the Dino Eye, aka the giant ferris wheel that gives you a bird’s-eye view of the park.

We’re a little disappointed by the Dino Farm, or the dinosaur riding experience, because the dinosaurs available for rides are so tiny and look very plastic. Then again, the smaller robots could be safer for kids if you’re willing to pay an extra THB100.

Our Coconuts reporter said some of the zones still smell of fresh paint, and one of the rides, 4D Deep World, was not yet open.

Locals tried to snap a perfect shot of the life-size T-Rex. Photo: @YingZz_Enjoy

Bangkokians had a brief moment of excitement earlier this week when they spotted a 4-meter-tall T-Rex cruising around the city on a truck — but the really thrilling news is that you can soon ride on this T-Rex. Oh yes.

The T-Rex was reportedly being transported to “Dinosaur Planet,” a new theme park near Phrom Phong BTS which will feature nearly 200 life-size dinosaurs including Velociraptor, Apatosaurus, Ankylosaurus, Anchiceratops and more.

The highlight of the dinosaurs is that they can walk, and visitors can ride on them for a fee, according to Matichon.

Here is the full list of the park’s attractions: