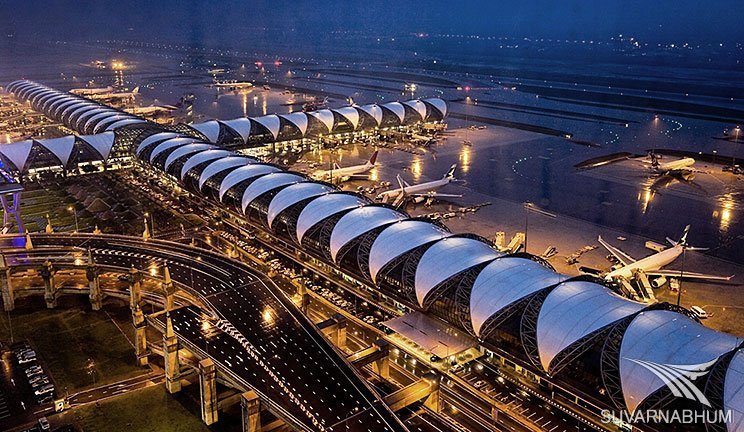 Bangkok Airport Thailand. Bangkok is served by two airports: Suvarnabhumi Airport and Don Muang Airport. Suvarnabhumi Airport is used by all airlines in Thailand except for Nok Air, Orient Thai and Air Asia, which use the old Don Muang Airport. Both these airports are about 30 km (19 mi) from the city centre, so be prepared for a long ride to get into the city. Also allow at least three hours to connect between them, as they are far away from each other and there is heavy congestion on the roads. However, if you arrive at one of these and have a flight within a few hours from the other, then there is a free shuttle bus service which uses the tollways. You need to show your ticket to get on board. 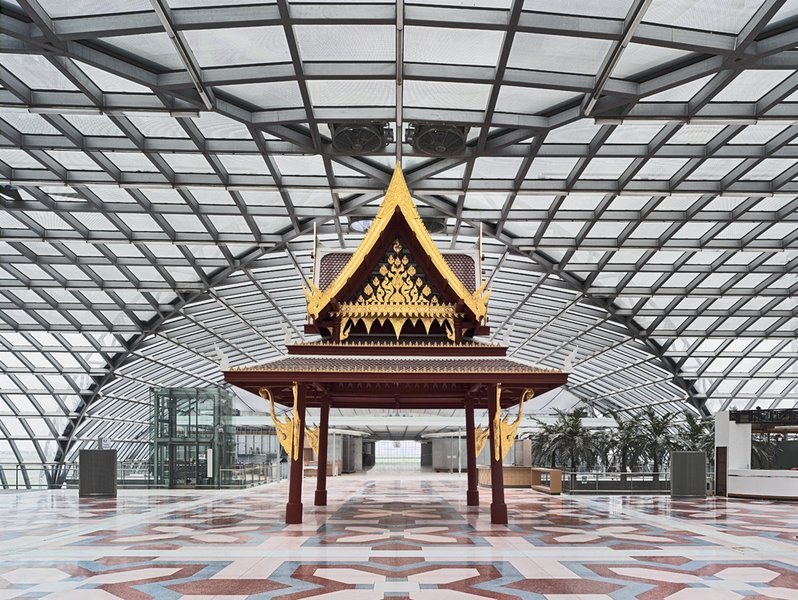 Located 30km (19 mi) to the east of Bangkok (in the Samut Prakan province), space-age Suvarnabhumi Airport (สุวรรณภูมิ, pronounced “soo-wanna-poom”) (IATA: BKK) started operations in Sep 2006 and is now Bangkok’s main airport and the busiest airport in Southeast Asia. It is used for almost all international and domestic flights to Bangkok. There is only one terminal building, which covers both domestic and international flights, but it is huge (by some measures the world’s largest), so allow time for getting around. There are two immigration sections, but processing time can be lengthy — 30 minutes and more.

Suvarnabhumi offers all facilities you would expect from a major international airport. There’s a transit hotel, ATMs, money exchange, restaurants, tax-free shops, an observation lounge and even a “redemption booth”, very reassuring for karmically challenged passengers. There are about 50 dining venues spread over the terminal building. The one that sounds most interesting probably is Panda Ready To Eat, but the cheapest place for a meal is Magic Food Point on level 1, near gate 8. There are a few stores in the check-in area, including a convenience store and a post office; however, the real shopping experience awaits visitors on the other side of immigration in the departure area, where the number of shops and duty free outlets leaves you wondering whether you are in an airport or a mall. There is not much to see at the observation deck on the seventh floor, since the steel structure of the roof blocks most of the view.

The duty free shops offer a wide range of almost every international brand. The prices are not competitive.

Beware of buying at airport convenience stores, located before security, if you are to bring those items inside. All cans and bottles (even containing food) are confiscated by security at check-in.

Free Wi-Fi for up to one hour is available in the departure lounge, after security and passport control; the login details can be obtained from the Information point. Access can be frustratingly unstable and unreliable.

There are plenty of ways to get into the city from Suvarnabhumi Airport. Most people opt for the Airport Rail Link, by far the fastest way to get into downtown, although taxis are also reasonably priced by world standards.

Located on the basement level of the passenger terminal, the Airport Rail Link

If you’re heading downtown, the Airport Rail Link has a good connection to the BTS Skytrain at Phaya Thai, though you will have to buy a new ticket. If Khao San Road is your final destination, you can hail taxis from the main road (around 60 baht, c. 6km distance), or hop aboard bus 15 (7 baht); this bus leaves from across Central World, BTS Siam, and BTS National Stadium and goes along Ratchadamnoen Klang Road and Chakrabongse Road serving both sides of Khao San Road.

There are free shuttle buses from Suvarnabhumi Airport to Don Muang Airport every hour between 05:00-23:00. You have to show them your flight ticket to board. At Suvarnabhumi Airport, get on the bus at gate 2 or 3. At Don Muang Airport, get on the bus at the ground floor arrival terminal. The shuttle bus goes directly via the express way, and does not stop during the ride.

Private Airport Express buses, including backpacker favourite AE2 to Khao San Road, stopped running in Jun 2011. To take a public bus or minibus, you must first take the free shuttle bus from outside the second floor, gate 5 to the Public Transportation Center a few kilometres away. From there, The BMTA public bus lines are:

Note that almost all of the routes were already suspended, leaving 5 routes that link to non-touristy places except 554. (Source: local)

These services take about 1-2 hours depending on traffic; frequency is usually every 20min during daytime. At night, it ranges from 20 minutes to one hour depending on the route. There are also privately-owned BMTA minibuses to many parts of Greater Bangkok, such as Don Muang Airport, Bang Kapi, Rangsit and Samut Prakan. They charge a flat rate of 50 baht and go directly to the destination, so they are faster than public buses that stop frequently along the way. To get to Khao San Road take Airport Rail Link City Line to Makkasan (35 baht) and change there to bus number 556 (13 baht), which will take you next to Democracy Monument from where it’s a short walk to Khao San Road. These buses are not very frequent so prepare for as much as 30-40 min waiting time. This is probably the cheapest possible way how to get from/to airport for 48 baht total. (The 556 bus goes on from Democracy Monument to Southern Bus Terminal- Sai Tai.) Though you could take bus 554 to Synphaet Hospital and then public bus 60 or alternatively bus 555 to Din-Daeng Road followed by bus 171, both options will take you through heavy Bangkok traffic on normal roads with frequent stops, thus making the Airport Link the best and fastest option. 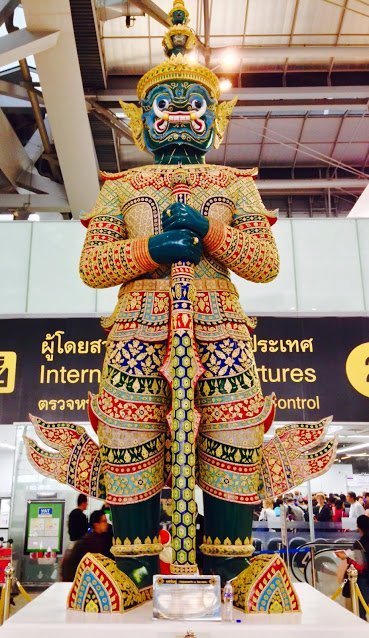 Ordinary metered taxis are available on the first floor (one floor below arrivals). Follow the “public taxi” signs that lead to the outside of the airport premises, queue up and state your destination at the desk (English is understood). Once there was a desk and you got a card ticket with two sections – one to give to the driver, often with your destination written in Thai – The small part for you was for complaints and is how the system is enforced: hold on to it to help avoid arguments later. Now queue tickets are dispensed by machine at the head of the two snake queues. There is a 50 baht surcharge on top of the meter (not per passenger!), meaning that trips to the city will cost 250-400 baht (plus possible expressway tolls of 50 and 25 baht, depending on time). Make sure you have change ready to pass to the toll operators to avoid being overcharged for the tolls later on. With very smooth traffic (which rarely occurs other than say in the wee hours), the ride takes about 30 minutes and costs under 250 baht (excluding tolls and surcharges). Otherwise, count on it taking 45-60 minutes and closer to 300 baht (excluding tolls and surcharges). During rush hour it can take much longer. No other surcharges apply, not even for going back to the airport. If there is a huge taxi queue, consider taking a limousine taxi, or take the free shuttle bus to the Public Transport Centre, which has more taxis. Go straight to the “official public taxi stand” and wait there. It is rare, but there have been reports of rigged meters that make the ride cost more than 400 baht. These taxis usually appear highly modified and it is a good idea to avoid them, or record the licence plate number of the taxi.

You should also watch out for ‘helpful’ touts hovering nearby the main taxi desk who will lead you across the road to legitimate taxis. These drivers will refuse to use the meter by saying there is heavy traffic and will charge a phenomenal price supposedly based on distance and number of passengers – for instance, they will quite brazenly tell you it will cost 2,500 baht to take two people to the city centre. Refuse to deal with these touts on sight. However, should you make the mistake of trusting them, find out the fare before they have a chance to leave the airport. Quoting the correct metered price (250-400 baht, as above) will garner a response that you’ll need to take a bus to get that kind of price. Stand your ground and insist they take you back to the airport – provided you do this before you leave, they’ll be quite happy to take you back with no charge.

So-called limousine taxis (which charge by distance, eg, around 800 baht to Sukhumvit) can be reserved at the limousine hire counter on the second floor (just outside arrivals), and aggressive touts will try to entice you on board. If you allow yourself to be waylaid by one of these taxi touts, they might quote you more than double the fare than an ordinary metered taxi would charge (900 baht instead of 400 baht, for example). You’d be silly even acknowledging their existence — ignore and walk straight past them.

Accommodation near the airport[edit]

There are plenty of hotels near Suvarnabhumi Airport, and huge construction projects are planned for the future. Day room facilities for transit passengers are now available at the Miracle Grand Louis Tavern on floor 4, concourse G, ☎ +66 2 134-6565, 2,000 baht per 4-hour block, no reservations accepted. Travellers looking for a free quiet place to doze undisturbed at night can use one of the benches on the bottom floor of the terminal (which seem to be a popular choice with tourists and locals).

All other accommodation in Bangkok is listed in the relevant district articles. If you want an overnight stay within 20min of the airport, get a hotel along Lat Krabang Road, here covered in the Lat Krabang district. The Tourist Authority of Thailand and other hotel and tourist agencies have counters on the arrivals floor of the main terminal. You can make reservations at plenty of hotels here. Check for special promotions and also whether the hotel offers an airport pick-up and drop-off service — especially useful for late night arrivals and early morning departures.