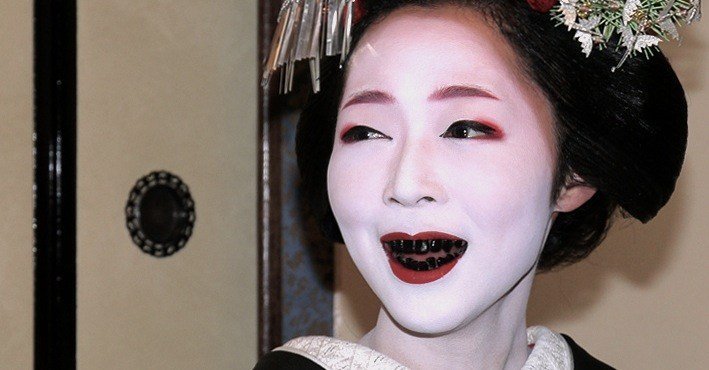 Asian Girls. Betel Chewing— Once widely seen in Thailand as a harmless narcotic and used in the art of seduction

While Japanese women and men for centuries, sort too beautify themselves, by blackening their teeth in a custom called Ohaguro, (Traces of blackened teeth can be seen in the buried bones and terracotta clay figures, from the 3rd century).

Thai people did not get onto the act until much later, sometime during the Lanna kingdom (13th to 18th centuries). When Betel chewing (Mâak chewing), was used as a form of flirting among the younger men and women. (Not to mention its stimulant and psychoactive effects).

In Japan ‘Ohaguto’ (which had no mind bending attributes), was banned by the government in February, 1870, with the result that the process gradually became obsolete. It resurfaced in the Meiji period, (October 23, 1868 through July 30, 1912), almost entirely dying out in the Taishō period (ending in 1927).

Wikipedia states that ‘The practice of blackening teeth, continues among many minority groups in China, Pacific Islands and Southeast Asia. It is mainly prevalent in older women……..’ Their page goes onto to detail different tribes that still practice teeth blackening.

Back in Thailand, the west had already changed the populations perceptions of beauty and in 1940, the then prime minister, in an attempt to promote a Modern Thai Society, started a campaign to encourage citizens to quit the habit of chewing Betel.

The intent of the government, was to both clean its cities and towns and at the same time help in maintaining the health, of its citizens. For centuries those who chewed Mâak, would spit red residue out onto the streets, permanently staining its roads and walls. It was this campaign which eventually changed the mindset of the majority of its people, making the habit seen today, as dirty and unhygienic.

Part of the governments plan, was to declare the chewing of Mâak illegal, withholding government services to those who were found guilty. It also set about cutting down all the Mâak trees throughout the Kingdom; while many were felled the trees were never wiped out completely.

Thankfully Mâak chewing in big cities across Thailand has almost completely vanished. Although in rural areas, the habit can still be found amongst the older population.

Asian Girls Thailand’s Beauty. Hopefully a thing of the Past

Betel Chewing around the World

Today, an estimated 600 million people chew betel quid’s, which, after tobacco, alcohol, and caffeine drinks, makes them the fourth most commonly used psychoactive substance in the world. See our post My Caffeine Fix is classed as a Drug

Betel chewing can still be found in most of the Kingdoms neighbours and in the Philippines (known as nga nga in Tagalog), China, Pakistan and India, where this concoction still remains one of Asia’s oldest, greatest addictions. In Thailand prior to 1940, it was common to see people of all ages and sexes chewing Mâak, including very young children.

According to scientific research, betel nut chewing greatly increases the likelihood of developing serious diseases including cancers of the mouth and esophagus. Chewing areca nut on its own has also been linked to oral submucosal fibrosis. While other research has stated that the longer term health risks are, relatively small compared to those of smoking cigarettes or drinking alcohol.

The Psychological Effects of Mâak Chewing

In 1904, Emile Kraepelin, (once described as the father of clinical psychiatry), was surprised that betel chewing did not seem to produce any kind of disorders. The direct psychotropic effects are said to be rather harmless, with no loss of motor control, no tendency to aggression, no black-outs, just a mild euphoria. Even after chronic use, it is reported that abstinence from the quid will not produce serious physical withdrawal symptoms, while the psychological dependency is less than for smoking tobacco.

Preparation of a Betel Quid

Betel nut is known by different names in Thailand; ‘หมาก’ (Mâak) or ‘หมากพลู’Mâak Ploo. Mâak is a Thai word, which loosely means fruit. ‘Betel’ is a Portuguese corruption of ‘vetila’, the Malay word for ‘leaf’. While Betel quid is the name for the final chewed product.

There are three main ingredients used in the preparation of a Betel quid; areca nuts, betel leaves (Botanically called Piper Betel; Betel vine is a member of the pepper family), plus red lime paste, prepared from crushed limestone or sea shells – the lime helps convert elements of the nut so it can be absorbed more quickly into the body. Lime also causes a strong burning sensation in the mouth, so very little is added to the quid.

Other flavorings can be added dependent on the user’s preferences including: Catechu, sandalwood or moon-flower bark, tobacco (a relatively new comer to the flavours that can be added) and plai; resembling ginger root or galangal. In Thai aromatherapy, plai oil is used as an essential oil, believed to ease pain and inflammation.

The different ingredients (the nuts are normally sun dried in advance and removed from the husk), are usually pounded together in a Mortar and Pestle, a must for some, who’s teeth are not as strong as they once were.

Once combined the mixture is wrapped in a Betel Leaf, put into the cheek and slowly chewed for ten to fifteen minutes. Chewing produces lots of reddish brown saliva, resulting in most of the quid being spat out, relatively little of what is in a quid, is digested.

It is not known how and when the lime paste, areca nut and the betel leaf were married together as one drug. Archaeological evidence from Thailand, Indonesia and the Philippines suggests they have been used in tandem for four thousand years or more.

Mâak still today plays a major role in a number of Thai traditions and ceremonies:

While usage of this anti sociable habit, is after so many centuries, dying out, tied to both the Thai people’s desire to break away from the label of ‘Third World,’ and the slow demise of its once many users. The real benefit is to those that no longer have to skip around, blots of spat saliva so characteristic of Thailand’s not so distant past. (To see how this once affected the Kingdom, you only have to look today, at the roads in Pakistan and India).

Now days here in a more affluent Thailand, it’s simply a matter of stepping over the modern day trappings……… of plastic bags and bottles, polystyrene cups, cigarette butts, broken beer bottles and of course dog pooh…………so much for western ideals and a Modern Thai Society.