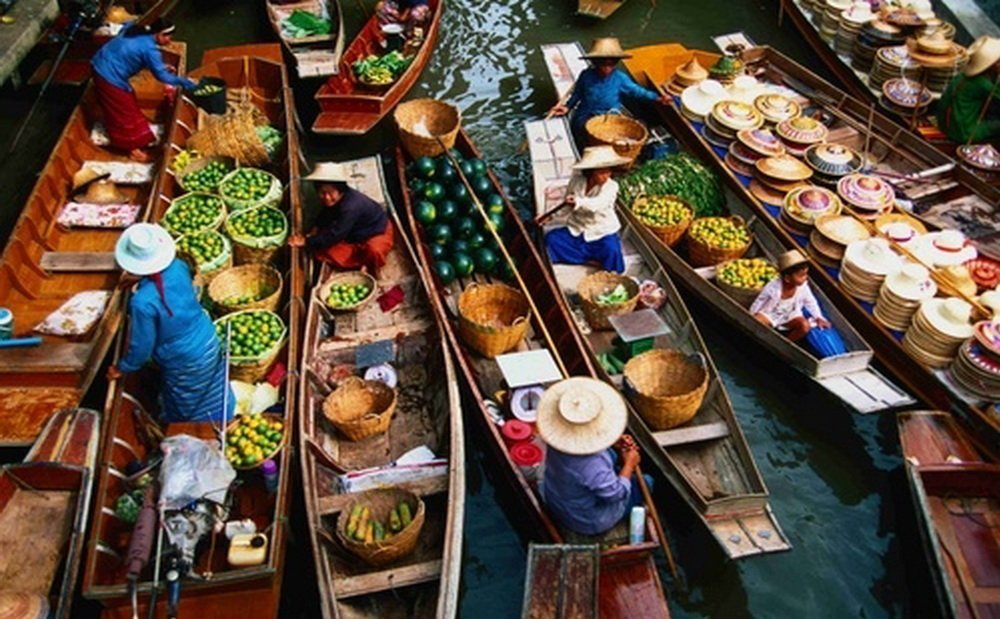 Floating Market. Everyone loves old travel posters, especially those from the early days of mass tourism. They were designed to tantalise travellers by reducing countries to charming clichés – Britain became Big Ben and cream-teas, Spain was known for bullfights and flamenco while Japan was all blossom and kimonos.

But for Thailand, floating markets were the theme: colourful photos showed widely-smiling ladies under broad-brimmed hats, paddling boats in packed canals, and selling exotic foods and fruit. A lovely image of course, but even the most nostalgic travellers know that the residents of Bangkok rather visit the nearest supermarket than the local canal when shopping for dinner in 2014.

So it’s always a delight for visitors to discover that there are still some floating markets around though not in the heart of Bangkok. Visitors will have to visit the canals of Amphawa in Samut Songkhram province, but it’s worth it when you buy your breakfast from a boat and see the smiling ladies in big hats.

Amphawa offers a glimpse of how Bangkok looked when canals outnumbered the roads and people travelled by boat. This is where the Mae Klong River meets the Gulf of Thailand and ancient canals irrigate the region. People still live on the canals but it’s only at the weekends that the market boats come out.

Amphawa Floating Market is on a bustling canal; its banks lined with attractive teak shop-houses that open to the water. Arrive early enough, and you’ll see Buddhist monks making their rounds by boat and the local people offering food and alms as they paddle by. Most visitors arrive around midday though to enjoy seafood lunches of shrimp and shellfish that are cooked on boats and handed up to diners on the bank. Many floating markets in Thailand are staged for visitors but Amphawa feels more authentic. Tourists here are mostly Thais enjoying a taste of yesteryear and the area’s unique snacks.  Boats sell fruit and vegetables from the local orchards and fields, and vendors offer colourful desserts traditional to the area. Even handicrafts, fashion and art are locally produced. This means you won’t find many of these goods in Bangkok’s markets so if you see something you like, snap it up.

By evening, the canal’s banks throng with people eating barbecue and seeking bargains. Coloured lights strung along the bridges, country music and tempting smells of cooking dinners make Amphawa a delightful place to be.

But there’s more than the market to enjoy. Boat trips to the temples are a fun way to see the area and are well-priced, especially if you’re in a group. You can also peep into the lives of people living in their riverbank homes and wave at the local children who seem more at home in the water than on land.

There are several temples to see, but don’t miss, Wat Bangkhae Noi. As you clamber from the boat, it seems like any other sleepy provincial temple, until you enter the main building (bot).  The interior is intricately decorated with elaborately carved wooden panels, showing scenes from the life of the Buddha and tales from Thai mythology and the detail is breath-taking. The carving in this Siamese Sistine chapel was done by skilled artists from Phetchaburi and took ten years to complete. Another must-see temple is Wat Bang Kung, which dates from the Ayutthaya period. Inside there are some ancient murals and an impressive Buddha image, but it’s the outside that will blow your mind.

For 200 years, the temple was forgotten and the local jungle closed in. It was restored in 1967, but the whole building remains covered with the mighty roots of the banyan tree that grows above it. The vines and roots bind and squeeze the building, holding it together as though protecting it.

Also at Wat Bang Kung are dozens of life-sized statues of Muay Thai fighters, illustrating the dance-like moves of the martial art. The statues honour General Phraya Phichai, a Muay devotee who fought the Burmese here in 1768 alongside King Taksin the Great (1734-1782).

To reach the temple you pass through a mini-zoo, home to hungry goats, a flirty ostrich and distinctly sleepy crocodile. A temple is a strange place to come face-to-face with a camel, but he seems happy enough being fed by passers-by.

Amphawa is near enough to Bangkok to make a day trip. But with so much to see, many people stay overnight – so there are some charming home-stays to accommodate them. These give tourists the chance to experience a different side of Thailand. You stay in real family homes, sharing meals and learning about provincial life. If you stay overnight you can take an evening boat trip to see Amphawa’s famous fireflies that flit around the canals. The mating insects put on an enchanting show, lighting the vegetation like living Christmas decorations. It’s said that boatmen use them to guide their way home. They certainly bring the day to a lovely end.

Amphawa should be on any Thai shopping and sightseeing list; after all, the Market offers an experience that lives up to the promise of the travel posters.

When: Amphawa Floating Market is open Friday, Saturday and Sunday

How: Mini buses leave regularly from Victory Monument, near Century the Movie Plaza.

By car: From Bangkok take Rama II Road (Highway No. 35). At Samut Songkhram province, take Highway No. 325 (Samut Songkhram-Bangphae). Go on for about 6 kilometres, and you’ll find Amphawa with parking by the temple.