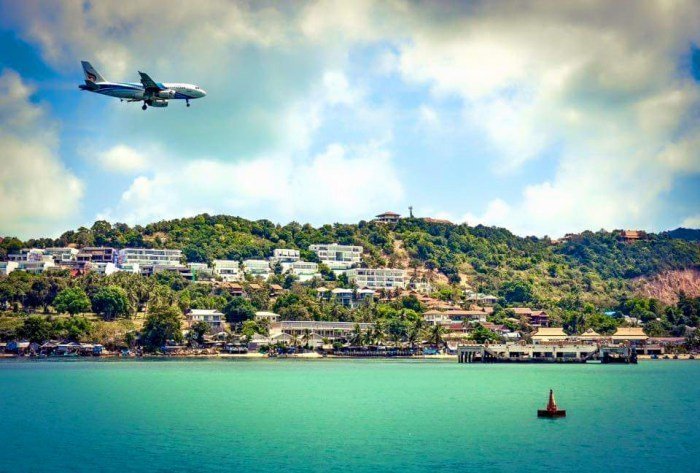 Koh Samui Airport, USM, is frequently described by visitors as ‘the most beautiful airport in the world’, the award-winning airport proves that it is possible to be both environmentally friendly and aesthetically pleasing.

We will now guide you, with a series of photos, from your arrival to Koh Samui airport, to the check-in, the stroll or transport through the outdoor shopping mall, the departure lounge, the grounds, to the plane and your departure.

Winner of 2 Environment Impact Assessment Awards, 1989 and 1996 for its use of locally produced palm leaves and natural, open-air cooling system Eight years later on 25 September 1997, Samui was upgraded to a customs airport with the addition of immigration facilities, customs services, new passenger terminals and additional direct flight routes into Samui

The fish-tank display at the internal public toilets

Back to the departure lounge

Your flight has been called, time to get to your plane.
These unique “people movers” are waiting to take you there

On your way you will see the clock-tower

The airport is now able to accommodate 16,000 passengers a day and increasing the annual passenger capacity from 1.3 million to six million. In 2009, the airport handled 1.3 million passengers and 17,707 aircraft operations

Yes, the cabin crew also use the “people movers”

The new terminals, outdoor areas and buildings have been designed to look and feel like a tropical resort. It is a low-rise development with thatched roofs, palm-tree pillars and wooden and rattan walls in an open-air layout that blends with its coconut-plantation surroundings

Yes, more food. Why did I have that last free snack in the departure lounge?