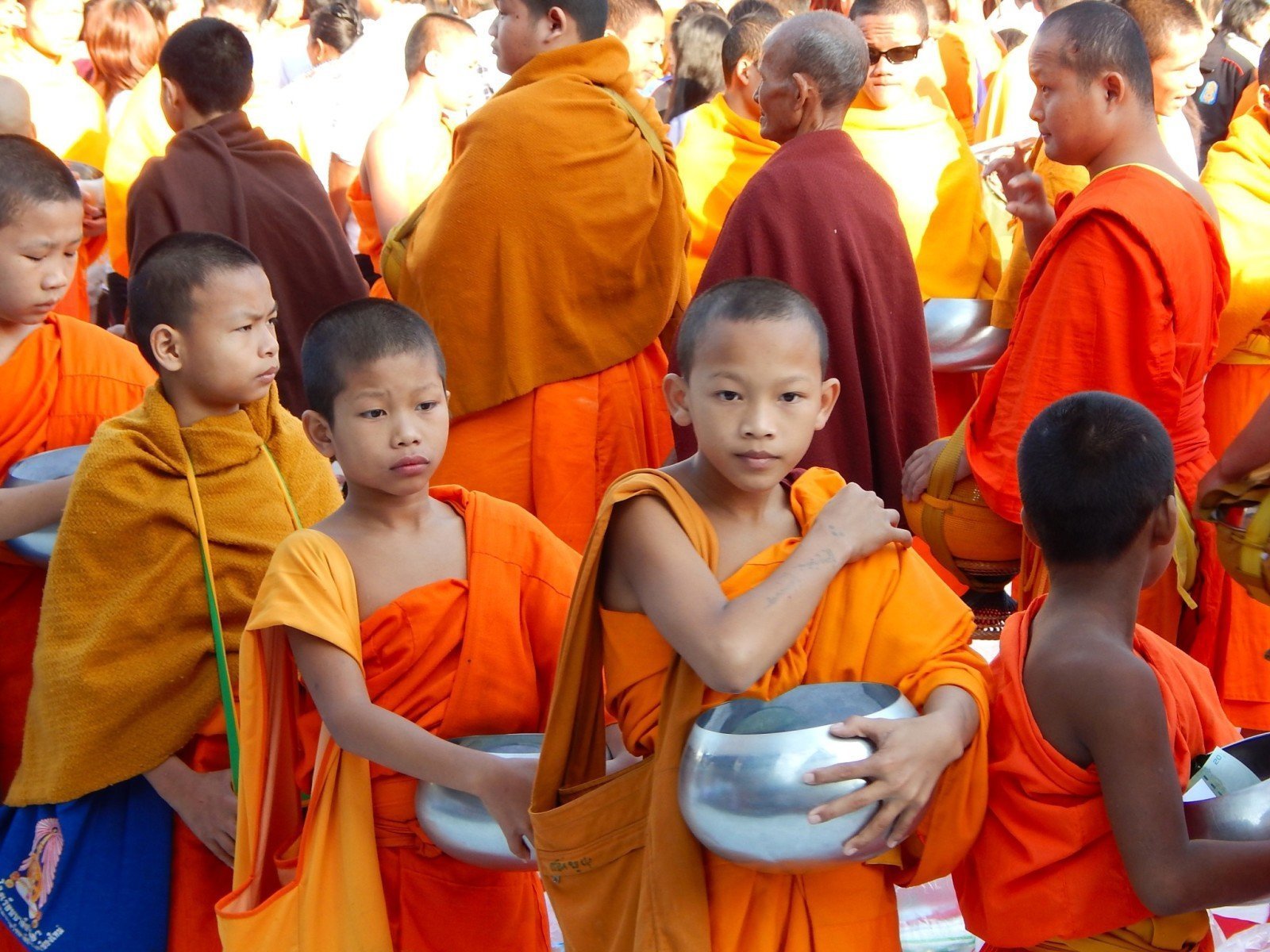 12600 monks collect alms Chiang Mai Thailand. To commemorate the anniversary of the Buddha’s enlightenment, 12,600 monks have attended an alms-giving ceremony in Chiang Mai this morning. The number is auspicious because in numerology adds up to 9 and also marks the estimated 2,600th anniversary of the Buddha’s passing into Nirvana. Buddhist monks from various districts in and around Chiang Mai province arrived in a fleet of buses and mini-buses for the special occasion. Similar events have already been held at a number of locations in Thailand this year including Bangkok and Hat Yai. Large crowds attended the merit-making ceremony this morning on Chiang Mai’s Chang Klan Road. Organisers of the event had specifically asked for donations of canned goods and non-perishable food items and provisions which in turn will be donated to victims of this year’s flooding in Thailand.

King Mengrai founded the city of Chiang Mai (“new city”) in 1296 on the site of an older city of the Lawa people called Wiang Nopburi. Gordon Young, in his 1962 book The Hill tribes of Northern Thailand, mentions how a Wa chieftain in Burma told him that the Wa, a people who are closely related to the Lawa, once lived in the Chiang Mai valley in “sizeable cities”. Chiang Mai succeeded Chiang Rai as the capital of the Lanna kingdom. The ruler was known as the “chao”. The city was surrounded by a moat and a defensive wall since nearby Burma was a constant threat, as were the armies of the Mongol Empire, which only decades earlier had conquered most of Yunnan, China, and in 1292 overran the bordering Thai Lü kingdom of Chiang Hung. With the decline of the Lanna Kingdom, the city lost importance and was occupied by the Burmese in 1556. Chiang Mai formally became part of Siam in 1775 by an agreement with Chao Kavila, after the Thai King Taksin helped drive out the Burmese. Because of Burmese counterattacks, Chiang Mai was abandoned between 1776 and 1791. Lampang then served as the capital of what remained of Lanna. Chiang Mai then slowly grew in cultural, trading, and economic importance to its current status as the unofficial capital of Northern Thailand, second in importance only to Bangkok.

12600 monks collect alms Chiang Mai. This is a fantastic ceremony to watch, so is a must see the next time you are in Chiang Mai.